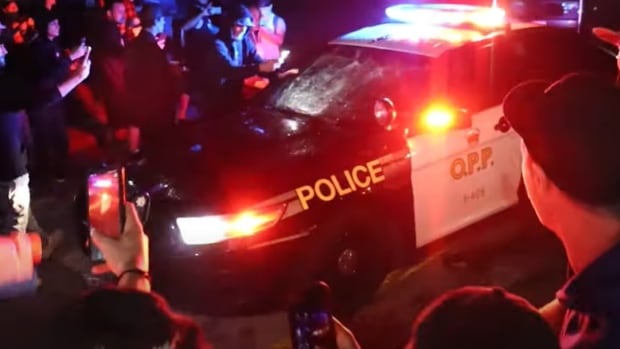 Ontario Provincial Police are warning people attending a car rally in Wasaga Beach, Ont., this weekend not to engage in "risky, illegal and dangerous actions" after a similar rally spun out of control in the Georgian Bay resort town last month.

"Members of the public are asked to anticipate an increased police presence, possible traffic delays and road closures," Acting Sgt. R. Simpson of OPP Central Region said in a Twitter video on Thursday.

"Visitors are reminded to respect our communities and not jeopardize the safety of our citizens or our neighbourhoods with risky, illegal and dangerous actions."

At a car rally on the Aug. 26 to 28 weekend in the town north of Toronto, two OPP vehicles had their windows smashed.  According to police and videos circulating on social media, there was street racing, stunt driving and vandalism.

The town's mayor, Nina Bifolchi, wondered why police weren't better prepared to handle the influx of visitors that weekend.

Simpson said the OPP will be working with Wasaga Beach bylaw enforcement officers and the Wasaga Beach Fire Department as well as Ontario Parks officials and the County of Simcoe Paramedic Services to ensure the safety of residents and visitors.

In a statement on the town's website on Thursday, Bifolchi said the town welcomes visitors but it expects them to obey the law.

"Participants in past unauthorized car rally events here have shown a complete disregard for public safety, various laws, and the police who enforce them. We call on participants, this time around, to leave their bad behaviour at home," she said.

The OPP said on Thursday it has charged 20 people with dangerous driving and stunt driving offences after the late August rally.

The accused face 37 Criminal Code and Highway Traffic Act offences, according to the OPP. The accused range in age from 17 to 37 and live across Ontario.

The town, meanwhile, is advising residents to avoid areas where there is a high police presence this weekend.

During the dark frigid days of last winter, Sean Horrell met a man living in a tent near the Thames River.

My low-income community doesn't deserve stigma. It's an amazing place to raise my family

This First Person article is the experience of Manorama Patki who lives in Calgary. For more information about CBC's First Person stories, please see the FAQ.

Residents in southwestern Newfoundland are dealing with the aftermath of post-tropical storm Fiona, which destroyed more than 20 homes and has displaced hundreds of people.

More than 300 new mines will be needed globally to meet growing demand for electric vehicle (EV) batteries, according to a new forecast from a mining analyst.

Many Nova Scotians will be spending part of Sunday in temporary shelters, making insurance calls, revving up chainsaws and wielding rakes as they clean up after post-tropical storm Fiona.

New Brunswick's public safety minister said it will take time to fully calculate the damage caused by post-tropical storm Fiona, but he expects help will be made available to affected residents.

Your Quebec election tool kit: where to vote, what to bring and why your vote matters

Quebec's 43rd general election is a little more than a week away, and you may be wondering what that means for you.

At the end of the Rainbow: Final film airs Sunday at Regina's Rainbow Cinemas

The vivid bands of colour that draw movie-lovers into Regina's Rainbow Cinemas and along to their seats will light up for the last time on Sunday.

Charlottetown police are asking residents to stay off the roads and shelter in place a full day after Hurricane Fiona ravaged P.E.I., leaving the vast majority of the Island's residents still without power or heat on Sunday morning.

A breed of compact cattle is allowing some northern Alberta families to mimic a bygone way of life — and skip buying milk at the grocery store.

RCMP say a search for a missing man in Lower Prospect, N.S., has been suspended after officials believe he was swept out to sea during post-tropical storm Fiona.

Priced out of Toronto's housing market? Alberta wants you to turn your eyes west

If you've been priced out of Toronto's real estate market, Alberta hopes its latest ploy will have you looking west to achieve your white-picket-fence dreams.

Inside the Lakeshore ER, a hospital in dire need of staff and space

On its busiest days, the Lakeshore General Hospital emergency room is so stretched for space that patients on gurneys line not just every hallway, but even the narrow passageway in front of the nursing station.

Marie Sanderson adjusts the yellow flowers on an arrangement, shaped to look like a school bus. There are two in the ditch where Earl Burns died — both here to pay tribute to his role as a local school bus driver.

The federal government says it's dropping all COVID-19 measures at borders on Saturday, meaning travellers will no longer need to provide proof of vaccination when entering Canada or wear masks on planes and trains.

Three Indigenous women aspiring to become lawyers in Alberta are challenging the King's Oath, because they say swearing an oath to the monarchy is modern colonialism.

Power outages are still affecting thousands of people across Nova Scotia in the wake of post-tropical storm Fiona.

Here is the state of electricity outages on P.E.I. Monday morning

If your data or internet is limited, click here for the CBC Lite version of the P.E.I. site.

As residents continue to sift through the rubble where their houses used to stand, they can take a little comfort on Monday in knowing the Canadian Forces are on the way to help.

Ausma Malik knocks on the door and waits with a handful of campaign literature.

After a struggle to find an experienced staffer willing to toil away for what could be years on the opposition benches, Conservative Leader Pierre Poilievre has settled on Ian Todd as his new chief of staff, according to sources familiar with the appointment.

The Ontario government is refusing to publicly divulge its progress in enrolling children in core autism therapies, after the last update showed it was far off its own target.