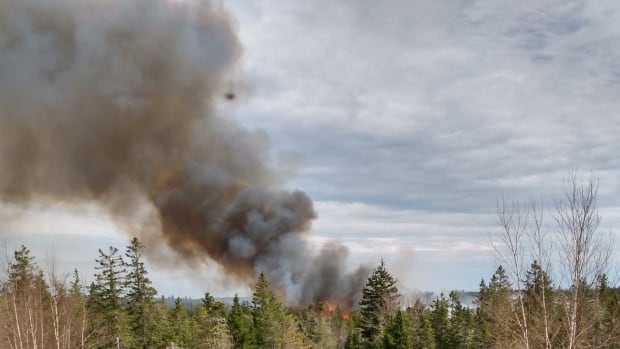 Several fire departments, provincial fire crews and a helicopter were on the scene Friday of a wildfire near Upper Musquodoboit, N.S.

As of Friday evening, the fire in Chaplin covers 20 hectares, the Department of Natural Resources said on Twitter.

A water bomber that arrived from Newfoundland and Labrador earlier in the week to help battle a large wildfire in Yarmouth County was en route to the Upper Musquodoboit area to assist with efforts there.

Roy Hollett, deputy fire chief with Halifax Regional Fire and Emergency, said once the water bomber had dropped a few loads of water on the fire, air crews would go back up to get a better size estimate.

Between 30 and 35 units including about 50 firefighters, including crews from Milford and Stewiacke, responded to the scene.

District 3 fire Chief Sherry Dean said multiple water supply lines had been set up, so accessing water wouldn't be an issue to fight the fire.

She was unsure if anyone in the area had needed to be evacuated.

"If the winds were to change or if the fire was to grow and anybody was in any danger, we would absolutely put out an alert, an emergency notification that would alert people and make sure that they were out of the area and safe in plenty of time," she said.

Power outages in the area were affecting around 3,100 Nova Scotia Power customers, the utility reported on its website. It said it shut the power off to help with firefighting efforts. Power was restored around 4:45 p.m. AT.