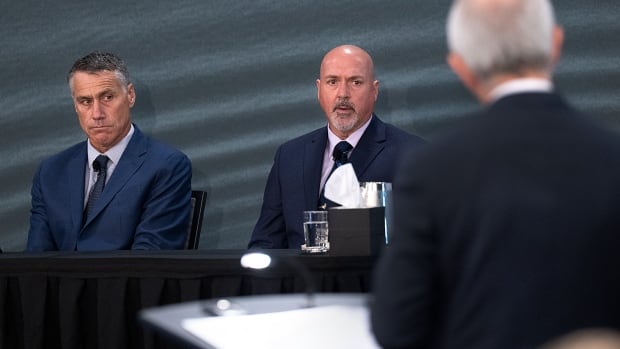 Retired staff sergeants Jeff West and Kevin Surette testified Wednesday before the Mass Casualty Commission leading the inquiry into the April 2020 mass shooting, when a gunman killed 22 people in the province.

The pair were asked Wednesday about their thoughts on using roadblocks around 10:20 a.m. on April 19, after the gunman had killed strangers he encountered as well as acquaintances.

Surette said he pushed to not block roads like Highway 102, the main artery through Truro, even though that was one choke point between the northern and southern parts of the province.

He said such a roadblock could easily have generated a line of cars two kilometres long. Given that they knew the gunman was killing "at random," Surette said didn't want to expose anyone to further danger.

"We knew that there was likely going to be a shootout at some point," Surette said Wednesday.

"We didn't want a shootout to happen in front of a lineup of civilians parked on the 102, probably getting out of their cars and looking around to see what's going on."

He said the "lesser of two evils" was the plan they decided on: placing officers at strategic points along the highways to watch intersections.

Both West and Surette said the 13-hour critical incident that evolved into a manhunt for a mobile shooter was a situation they reacted to based on their decades of experience — but it was not something the RCMP had ever trained them for.

The scenario that Surette feared — citizens pulling over to ask questions at a shooting scene — happened later that morning around 10:50 a.m. in Shubenacadie, where RCMP Const. Heidi Stevenson was killed by the gunman after a gunfight between the two. Joey Webber, a man who pulled over to try and help as he passed by, was also killed.

Inquiry documents show multiple people in nearby cars saw the gunman's shootout with Stevenson on a highway interchange, drove directly by while he was still there, or were roaming around on foot and approached the RCMP officers that were later guarding the scene.

West and Surette were the two on-call critical incident commanders (CIC) the night the shootings began on April 18. West was reached first by Steve Halliday, a now-retired staff sergeant, who called him at 10:42 p.m. to tell him there was a likely active shooter situation in Portapique.

West let Surette know he was being called in to take charge of the incident and bring in resources like the emergency response team, and arrived at the makeshift command post in Great Village near Portapique after 1 a.m. Surette, who was based in Yarmouth, made his way to Great Village a few hours later to offer West support.

They also addressed gaps in information, including that they weren't aware until eight hours after the fact that a witness to the gunman had been shot but survived.