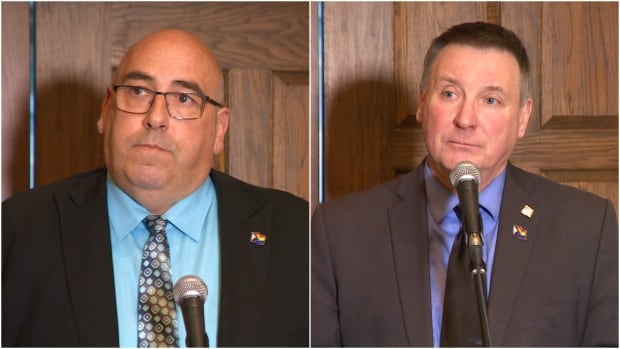 On Wednesday, Independent MHA Paul Lane said a constituent contacted him recently about an alleged "very serious" whistleblower report regarding a senior official and toxic workplace culture at Elections Newfoundland and Labrador.

"I'm told it concerns bullying, harassment, nepotism, a whole bunch of issues," Lane told reporters. "I'm told that there was 10 findings in that report, and I'm told that it was involving 21 employees. I'm very concerned about potentially the toxic workplace that they're working in as we speak."

Lane wouldn't identify the officer named by the report. The chief electoral officer in Newfoundland and Labrador is Bruce Chaulk. CBC News has asked Chaulk and Elections N.L. for comment.

Lane says the report was submitted to the Office of the Citizens' Representative two months ago. If the citizens' representative made any findings, he said, they would have been submitted to House of Assembly Speaker Derek Bennett.

But Lane said he hasn't seen the alleged report himself — and couldn't say for sure if it even exists. If it does, it would have been forwarded to the House of Assembly Management Commission, which is chaired by Bennett. Lane said his attempts to find out more have been unsuccessful, and he's filing his own complaint with the citizens' representative.

"If there was … no report, why would the Speaker just not simply respond to say there is no report?" he asked.

During question period Wednesday, interim Progressive Conservative Leader David Brazil attempted to ask Premier Andrew Furey about the report, but was quickly shut down by Bennett.

"Is the premier or his office aware of a report related to the conduct of an officer of this House? If so, when was the report submitted?" asked Brazil.

Furey didn't answer the question. Instead, Bennett responded: "The question is not in order. It doesn't fall within the purview of the administrative confidence of the executive branch," Bennett said.

In a statement, a spokesperson for the Office of the Clerk reiterated what Bennett said during question period. The statement also said according to House of Assembly protocol, the Speaker does not publicly disclose information contained in reports received by his office.

"There's been no report delivered to the executive that I'm aware of," he said.

Its services are still being developed, but a gender-affirming clinic in Charlottetown is making a huge difference in the lives of members of P.E.I.'s trans community.

Surrey RCMP says one man is dead following what they believe may have been a targeted shooting outside a hotel on the 13300 block of King George Boulevard in Surrey, B.C. around 5 p.m. Monday

Kassius Robertson hit eight three-pointers, Shai Gilgeous-Alexander also had 24 points and Canada cruised to an easy 113-67 win over the U.S. Virgin Islands on Monday to improve to 6-0 in World Cup basketball qualifying.