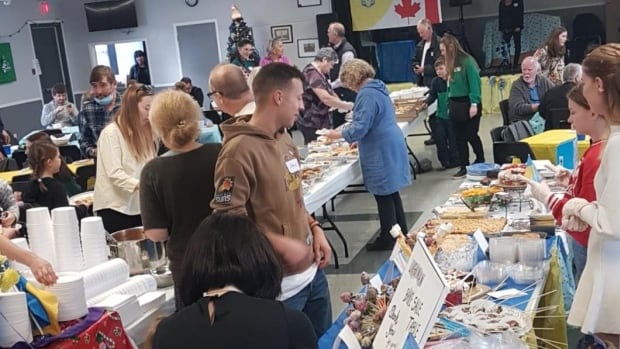 Members of the Ukrainian community in Digby County took a day off from worrying about war in their homeland to celebrate Christmas and some treasured traditions.

Many Ukrainians follow the Julian calendar, which celebrates Christmas Day on Jan. 7.

About 200 people showed up on Saturday afternoon for a Ukrainian Christmas potluck in Digby, according to organizer Diane Axent.

Ukrainian Denys Saiechnikov, who immigrated to Nova Scotia in August, described the event as an "amazing experience."

He said Ukrainians from the area were enjoying their time together and many had brought their children.

"We talk with each other and it's so nice," Saiechnikov said. "Mostly people have been enjoying the time and we don't discuss about the war."

Saiechnikov said it was a traditional Christmas with people sharing food they cooked, including perogies and borscht, and chatting about things like their jobs and what they do in their free time.

Axent, a first-generation Ukrainian-Canadian, told CBC Radio's Mainstreet N.S. that she has been observing the holiday in Nova Scotia for over 40 years.

This year she decided to turn her family event into a community gathering with a little assistance from the provincial government, Axent said.

She said some of the people attending were refugees.

Axent said she has been helping some of the recent arrivals with resumés and finding jobs in the community.

The war remains an everyday presence in their lives, she said, but the event was a chance to put it aside for a short time and just celebrate being together.

"The purpose of today is to remember that this is their community now, and they're bringing into our community their tradition," she said.

Axent said the event was also a chance for people to exchange contacts and have conversations.

One year after the self-styled "Freedom Convoy" arrived in Ottawa, the city says only about half the value of the tickets handed out during the protests has been paid.

Inuvialuit fashion designer Taalrumiq says she knows first-hand how using real animal fur can foster harsh criticism and anger in people who are against the fur industry.