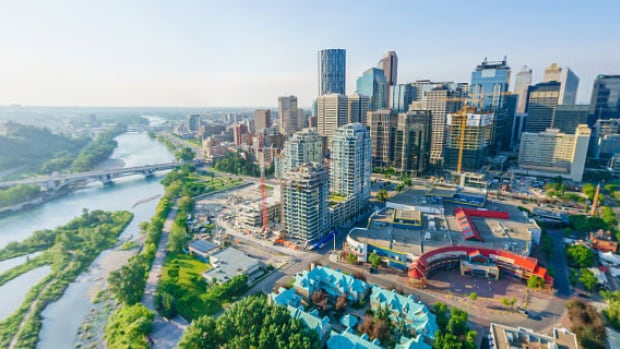 A redraw of federal ridings in Alberta is proposing some big shifts and additions to districts in the province, especially in the Calgary area.

The overview from the committee in charge of these reviews suggests moving Banff and Canmore into separate ridings, rejigging rural ridings, adding a new district in Calgary's northeast and two more on the outskirts of Alberta's two major cities.

The independent, non-partisan commission is assigned to examine the riding boundaries based on the 10-year census. Alberta's panel was also tasked with suggesting locations for three new ridings, bringing the total number of federal seats up to 37.

The commission takes into account population growth, communities of interest and the history of the area when proposing new geographical boundaries. Alberta's population grew from 3,645,257 in 2011 to 4,262,635 in 2021, according to Statistics Canada.

The proposal would put Banff in the riding of Yellowhead with places like Jasper and Hinton, and leave Canmore in a district with Cochrane and Olds.

"We thought it was odd that we would be separated from Canmore," said Corrie DiManno, mayor of Banff.

"We like to say that we are one community with two towns."

DiManno said she sees the benefit of being attached to Jasper, the other national park town, or the potential to have two MPs representing the Canmore and Banff region.

Banff's submission for upcoming hearings on the proposals will include a query about having Jasper, Banff and Canmore potentially included in the same riding.

The decision around Banff/Canmore was made largely based on division of population, according to Justice Bruce McDonald, the commission chair.

"There has been certainly some expression that Banff and Canmore do have a lot in common, and perhaps Banff has more in common with Canmore than it does with Jasper, even though they're both in national parks."

In 2021, the Conservatives won that seat (currently called Banff-Airdrie) with 57 per cent of the vote.

"When you put Banff and Canmore into the same district, we don't see the same kind of conservative dominance as we do in other ridings," said Lori Williams, a political scientist at Mount Royal University, explaining how shifting the riding boundaries could change the dynamics.

Service reductions at Stanton OR until next year as nursing shortage continues to plague N.W.T.

A shortage of health-care workers — especially of nurses — continues to affect health services in the Northwest Territories.

Aid shipment to Afghanistan cancelled due to Canadian anti-terrorist law

Two containers of food bound for Afghanistan have been cancelled by a Canada-based aid agency because of a law banning any dealings with the Taliban.

More than a restaurant: Golden Inn customers share what makes it special

Otis Chan pauses while trying to sum up what the Golden Inn restaurant in Calgary's Chinatown represents to him.

The Royal Canadian Air Force has ordered an "operational pause" for its Snowbird air demonstration squadron jets after a crash earlier this month.

Six years after Ontario ombudsman Paul Dube recommended a standardized, mandatory de-escalation training for police across the province, Ontario is no closer to making it happen, he said on Wednesday.

The University of Prince Edward Island will now require all graduating students to have completed a course in Indigenous Studies.

Former U.S. president Donald Trump said on Wednesday he refused to answer questions during an appearance before the New York state attorney general in a civil investigation into his family's business practices, citing his constitutional right against self-incrimination.

Residents and their local councillor are concerned about the future of a mall in Scarborough after a Toronto developer proposed to tear it down and create a condo community.

London's police chief says he will review how officers treated a popular online transgender activist they arrested at gunpoint last week after someone sent death threats to politicians in the southwestern Ontario city.

To develop the Ring of Fire and build more mines to extract critical minerals the Ontario government will need to consult with First Nations the "right way," said the grand council chief of the Anishinabek Nation.

Former IWK CEO sentenced to 5 months in jail for fraud

Tracy Kitch, the former CEO of the IWK Health Centre in Halifax, was sentenced Wednesday to five months in a Nova Scotia jail followed by a 12-month probation period for fraud over $5,000.

Two workers died after a trench caved in on them at a job site in Ajax, Ont. on Monday, prompting calls for tighter safety regulations and more regular inspections on construction sites to prevent fatal workplace accidents in the field.

Lumber, wheat, and oil: Tumbling prices could mean the worst of inflation is over

For much of the last few years, watching the price of lumber has been painful for anyone working on their home.

Fuel prices dropped slightly across Newfoundland and Labrador Thursday, as the Public Utilities Board made its regular weekly change to how much retailers can charge.

A Nova Scotia judge has referred a convicted murderer to a restorative justice program — a first for the province.

New Brunswick's Energy and Utilities Board has ruled that a participant in one of its hearings failed to properly disclose who he represented, resulting in procedural unfairness against N.B. Power.

Quebec's public health director is recommending that arsenic levels in the air of a western Quebec city be reduced significantly, but even then they would remain five times higher than the provincial standard.

Family of missing man from Squamish, B.C., still looking for answers in Manitoba

A Squamish, B.C., family is seeking answers as the search for a man reported missing in southwestern Manitoba in early August continues.

A man who was severely injured in an attack in a Saskatoon hospital a month ago has died of his injuries, Saskatoon police say.

The Russian steel and mining company Evraz PLC has announced it plans to sell its North American assets, which include a steel plant in Regina that employs 1,200 people.

Jackie Lovely, the UCP MLA for Camrose, says she was the only other MLA on a panel which awarded a prize to an essay containing racist and sexist statements.

A mudslide has closed Highway 1 in B.C.'s Fraser Canyon on Wednesday night.

Mooney's Pond being drained, but no need for nature lovers — or the fish — to worry

Despite some wet weather this week, one natural area on Prince Edward Island is looking a bit dry lately.

Alberta teachers got a chance to ask United Conservative Party leadership candidates about their plans for education on Wednesday.

B.C. woman claims RCMP broke her leg and left her suffering overnight in a jail cell

Lindsey Tom admits she resisted RCMP officers when they tried to remove her from her boyfriend's home last Thursday but alleges the force officers used was excessive and left her in hospital with a broken leg.