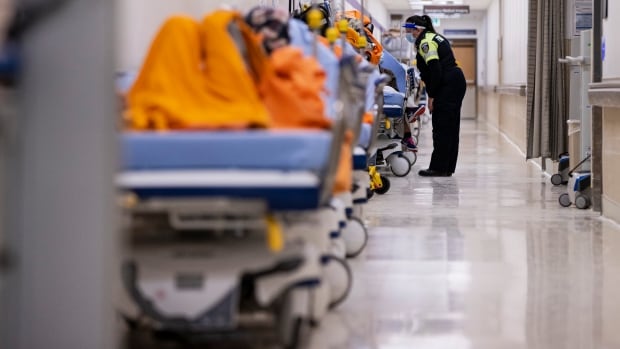 In a tweet, Minister of Health Christine Elliott said that 53.5 per cent of those people were admitted to hospital because of COVID-19 while 46.5 per cent were admitted for other reasons and tested positive — though doctors say so-called "incidental" cases are still placing immense strain on the system.

The province also reported 7,086 new cases of COVID-19 — however, that number is not a reliable indicator of the true spread of the virus given restricted testing access. Officials also reported 37 more deaths, though the province says those deaths occurred over the span of the last 10 days.

Intensive care admissions rose slightly to 580. Elliott said that 82.1 per cent of patients were specifically admitted for COVID-19, while 17.9 per cent were admitted for other reasons but tested positive for the virus.

Though hospitalizations continue to rise, there may be some cause for cautious optimism. In an exchange on Twitter, Anthony Dale, CEO of the Ontario Hospital Association, said the rate of new admissions to critical care "does appear to be decelerating."

People who are fully vaccinated represent 78.4 per cent of the province's total population, but account for 199 of Ontario's 580 ICU admissions.

Despite many parts of the province being pounded by a snowstorm Monday, over 39,000 vaccine doses were still administered, Elliott said.

He told Ottawa radio station CFRA Tuesday that he hates putting public health measures in place and that there will soon be some positive news on that front.

The government announced on Jan. 3 that due to the highly transmissible Omicron variant driving up COVID-19 infections and hospitalizations, restrictions would be placed on businesses until at least Jan. 26.

Restaurants were ordered closed for indoor dining, museums, zoos and other such attractions were shut down, as were gyms, indoor recreation facilities, cinemas and indoor concert venues, while retail settings and personal care services were capped at 50 per cent capacity.

Schools were also moved online for two weeks, and classes are resuming in person this week.

Ontario's chief medical officer of health said last week that he is watching for a peak or plateau of COVID-19 hospitalizations, and he can't guarantee the province will be ready to ease the restrictions on the 26th.