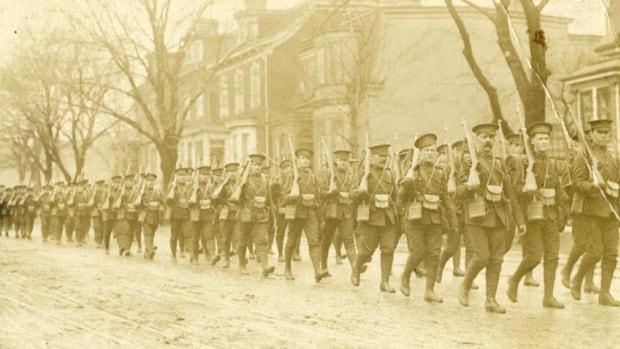 Like roughly 60,000 of his comrades, Nova Scotian William Gerald Arthrell died fighting for Canada during the First World War.

While the teenager's body was buried at the Bailleul Communal Cemetery in northern France, a few kilometres from the border with Belgium, Arthrell's brain made it back to Canada.

That's because Arthrell was one of an unknown number of Canadian soldiers from which 799 body parts were extracted as part of a program that harvested the organs of soldiers for medical research purposes.

"How could we be harvesting the body parts of slain soldiers?" said Tim Cook, the author of Lifesavers and Body Snatchers: Medical Care and the Struggle for Survival in the Great War.

His recent book reveals this forgotten chapter of Canadian history.

When Arthrell enlisted, the Glace Bay, N.S., man stated he was a miner by trade.

He had a fair complexion, brown eyes and was tall — six feet two and a half inches — according to his military file. The documents note he died on March 26, 1916, after being shot in the head the day before.

Nowhere in his file does it note he was buried without his brain.

Cook, the chief historian and director of research at the Canadian War Museum in Ottawa, said it was about two decades ago he first came across a reference to autopsies being conducted on Canadian soldiers.

"I had thought in this war of mass slaughter, of dirt and deprivation, of the high-explosive shells, of the machine-gun fire, chemical agents, that there wouldn't have been time for autopsies," he said.

The document also mentioned body parts being removed. That sparked Cook to comb through archives and the letters of soldiers and medical personnel to learn more.

Cook said the 799 body parts were initially sent to the Royal College of Surgeons in London, where they were stored and treated. Some were presented in exhibition galleries before being sent to Canada.

"There were several thousand additional body parts that remained in London and hundreds of body parts that went to Australia as well, so this was a widespread program," said Cook.

He said it's unclear how many Canadians had their organs harvested. He said the records aren't complete. But he said some soldiers had more than one body part removed.