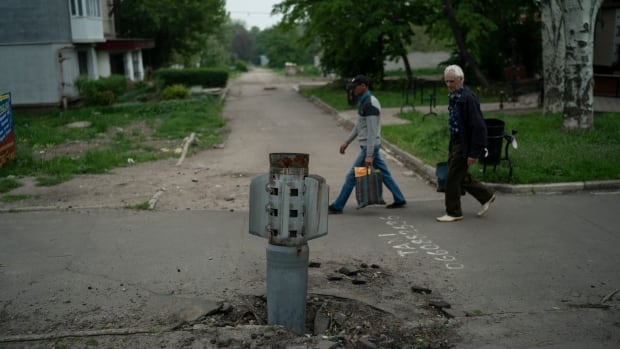 The battle for the Donbas region in Eastern Ukraine has turned into a village-by-village, back-and-forth slog with no major breakthroughs on either side and little ground gained.

In his nightly address Friday, Ukrainian President Volodymyr Zelensky said no one can predict how long the war will last but that his country's forces have been making progress, including retaking six Ukrainian towns or villages in the past day.

"No one today can predict how long this war will last," Zelensky said.

"This will depend, unfortunately, not only on our people, who are already giving their maximum. This will depend on our partners, on European countries, on the entire free world."

Ukraine has driven Russian troops away from the city of Kharkiv in the fastest advance since Kremlin forces pulled away from Kyiv, Ukraine's capital, and the northeast more than a month ago.

Southeast of Kharkiv, Ukrainian officials said they had stopped Russian forces from crossing the Siverskyi Donets river west of Severodonetsk by destroying a pontoon bridge.

Ukraine's airborne command, which released photos and video of what it said was the damaged bridge and several destroyed or damaged Russian military vehicles nearby, said its troops "drowned the Russian occupiers."

With Ukraine pleading for more arms to fend off the invasion, the European Union's foreign affairs chief announced plans to give Kyiv an additional 500 million euros ($672 million Cdn) to buy heavy weapons.

Ukrainian Defence Minister Oleksii Reznikov said heavy weapons from the West now making their way to the front lines — including American 155 mm howitzers — will take some time to turn the tide in Ukraine's favour.

"We are entering a new, long-term phase of the war," Reznikov wrote in a Facebook post. "Extremely difficult weeks await us. How many there will be? No one can say for sure."

Finland's president and prime minister announced on Thursday that the Nordic country should apply right away for NATO membership.

"You [Russia] caused this. Look in the mirror," said Finnish President Sauli Niinisto.

Finland's parliament still has to weigh in, but the announcement means it is all but certain to apply — and gain admission. The process could take months to complete.

Russia to celebrate Victory Day without a victory in Ukraine

In the shadow of the Kremlin, in the middle of a war, Russia's getting ready for a parade — a Victory Day celebration, but without a victory in Ukraine to celebrate.

When the moist concrete walls deep below ground and the mould and the cold and the weeks without fresh fruit or vegetables became too much to bear, some in the bunker underneath Elina Tsybulchenko's office decided to visit the sky.

Ukraine said just 50 civilians were evacuated from a bombed-out steelworks in the city of Mariupol on Friday, accusing Russia of violating a truce intended to allow all those trapped beneath the plant to depart after weeks under siege.

Amnesty International announced Friday that it has evidence of alleged war crimes committed earlier this year by Russian forces in the Kyiv region during the invasion of Ukraine.

It happened in a split-second.

The former president of Ukraine is urging Canada to get behind a U.S. representative's initiative to authorize American military force to defend the embattled eastern European country if Russian forces escalate to chemical, biological or nuclear attacks.

The surprising resiliency of Russia's economy (and why it won't last)

Russia's economy has been isolated, its billionaires have been sanctioned and hundreds of foreign companies have either left the country or cut back on operations there.

Anti-abortion activists and abortion rights supporters took to the streets of Washington, D.C. after news that the U.S. Supreme Court may overturn the 1973 Roe v. Wade ruling that legalized abortion.

Civilians climb over rubble, board buses to flee besieged Mariupol

The first civilians evacuated from the bombed-out steel plant that has become the last stronghold of Ukrainian fighters in Mariupol slowly made their way toward safety Monday, as others who managed to escape the city described terrifying weeks of bombardment and deprivation.

Ukraine fighters who defended Mariupol, now in Russian hands, are registered as prisoners of war

The Russian military said Thursday that more Ukrainian fighters who were making a last stand in Mariupol have surrendered, bringing the total who have left their stronghold to 1,730, while the Red Cross said it had registered hundreds of them as prisoners of war.

Nearly 1,000 last-ditch Ukrainian fighters who had held out inside Mariupol's pulverized steel plant have surrendered, Russia said Wednesday, as the battle that turned the city into a worldwide symbol of defiance and suffering drew to a close.

Russia's Foreign Affairs Ministry said on Wednesday it was closing the Moscow bureau of the CBC and withdrawing visas and accreditation from the public broadcaster's journalists, after Canada banned Russian state TV station Russia Today.

Ukraine's military said on Tuesday that it was working to evacuate all remaining troops from their last stronghold in the besieged port of Mariupol, ceding control of the city to Russia after months of bombardment.

Officials and family members have begun to release the identities of the 10 people killed in a mass shooting at a Buffalo supermarket on Saturday.

'It could have been anyone,' says member of Buffalo neighbourhood grieving after mass shooting

Tony Marshall, who's been driving customers to and from the downtown Tops Friendly Markets location in Buffalo, N.Y., for 13 years, had just left the store Saturday afternoon and stopped off at his home nearby when he heard the shots.

The battle for the Donbas region in Eastern Ukraine has turned into a village-by-village, back-and-forth slog with no major breakthroughs on either side and little ground gained.

The Kremlin responded to Finland's announcement in favour of joining NATO on Thursday, saying the decision is a radical change in the country's foreign policy and that Finnish entry into NATO is "definitely" a threat to Russia.

Ukraine's top prosecutor disclosed plans Wednesday for the first war crimes trial of a captured Russian soldier, as fighting raged in the east and south and the Kremlin entertained the possibility of annexing a corner of the country it seized early in the invasion.

Faced with growing pressure to evacuate Ukrainian refugees, Ottawa will soon organize three charter flights to bring those fleeing the war to Canada.

Lithuania's parliament has voted unanimously to describe Russia's actions in Ukraine as "genocide" and "terrorism," two weeks after a similar move by Canadian lawmakers.

Prime Minister Justin Trudeau surprised a lot of people with his unannounced weekend visit to Ukraine for an in-person meeting with President Volodymyr Zelensky.