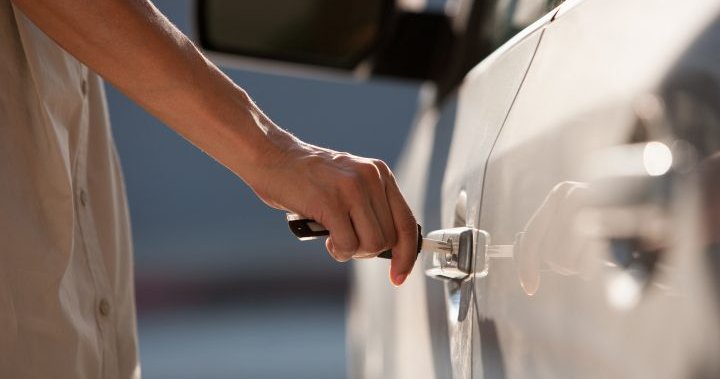 Advances in technology that provide keyless driving have provided convenience to car owners, but have also opened the door for criminals, experts say.

With vehicle theft surging across Canada, the auto industry is introducing new ways to beef up security and prevent stolen cars from getting exported outside of the country.

A report by Équité Association published in November said there has been an increase in thefts for export, increased use of sophisticated theft technology, and high-end vehicle thefts.

It’s a “coast-to-coast problem,” said Bryan Gast, vice president of investigative services at Équité Association, with Ontario leading the number of vehicles stolen in the country, followed by Quebec and Alberta.

For example in Toronto last year, there were 9,439 reports of auto theft — a jump of nearly 45 per cent from the previous year. Toronto Police Service records show that auto theft has increased annually every year since 2018.

It’s a similar story in Calgary, which saw a 24.5 per cent rise in vehicle theft incidents last year, as of October 2022.

Lingering global supply chain issues brought on by the COVID-19 pandemic with limited inventory and large demand have driven the rise in auto theft, experts say — and organized crime networks are cashing in by using Canada as “a source country.”

The vehicles are stolen for export, for use in the commission of other offences, for the purpose of rebuilding, and for the smallest percentage, joyriding, he said.

The Financial Accountability Office of Ontario says the province's economic growth is expected to slow sharply this year with a modest recovery beginning next year.

Heather House is concerned that the potential extraction of lithium and other critical minerals will exacerbate food insecurity in northern Quebec.

China claims it was a civilian balloon used for meteorological research but has refused to say to which government department or company it belongs.

As premiers gather for a health summit with the PM, a majority of Canadians say they want more funding for health care - but many also want plans attached to increased spending.

Toronto-based Indigo said in a release Wednesday that it hopes to have its systems back online as soon as possible following the incident, which the company did not elaborate on.

The Burnaby Urban Search and Rescue team is off to Turkey to help relief efforts after Monday's deadly earthquakes devastated the region.

Based out of The Hague, the organization works in different countries to help identify the remains of those who have disappeared or been killed in conflicts and disasters.

Last off-season, the Elks signed Lawler to a one-year contract worth a reported $300,000, making him the highest paid player in the CFL who was not a quarterback.

Bradford Mistakenchief's mother was diagnosed with terminal liver cancer and was only given 18 months to live.

B.C.'s Transportation Minister is expecting the total price tag for flooding repairs to B.C. highways to balloon to close to one billion dollars.

Following a fatal incident on the weekend, Ontario Provincial Police and seasoned snowmobilers are warning people to be safe out on the trails.

Sheldon Wuttunee with SFNNRCE said the Export database, a database that holds information about Indigenous companies, has far reaching benefits.

Stellarton police said they were called by Nova Scotia Power at 8 a.m., after employees found a deceased man at the sub-station on North Foord Street.

Material found on devices of a California man charged with sexual misconduct led law enforcement to the home of an Alberta woman who was allegedly sexually exploitering her child.

The Progressive Contractors Association of Canada alleges the labour agreement is restrictive and decreases the number of eligible workers.

Nathan Phillips Square will host the Toronto Maple Leafs for an outdoor practice this weekend.

A Crown lawyer grilled William Sandeson during cross-examination about what she called his 'two very different sides' during his first-degree murder trial Tuesday.