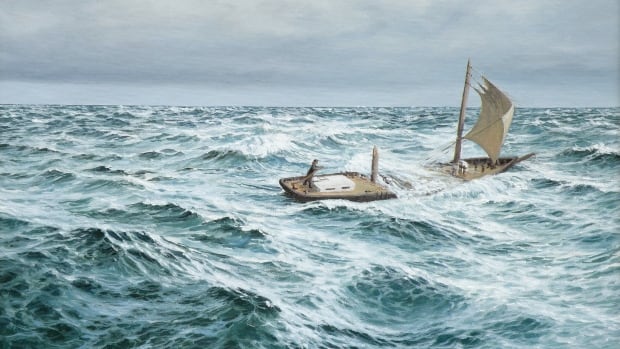 Eric Allaby has spent a lot of time below the surface of the the Bay of Fundy.

And he's seen things not many others have had the chance to survey in those icy waters.

Allaby was a Liberal MLA for close to 20 years, but before that he was a commercial diver and it was his curiosity in that line of work that led him to research Bay of Fundy shipwrecks and prompted his latest book The Sea Wins: Shipwrecks of the Bay of Fundy, which he also illustrated.

"I stumbled into marine history research through the back door with a case of dynamite under one arm and the diving tank under the other," Allaby told Information Morning Saint John about the introduction to the book.

"Have you seen a book that starts off that way?" he said.

Allaby's book looks at more than three dozen wrecks in the bay, and some of those stories really stood out for him, such as the Wallace off Grand Manan.

According to a Government of New Brunswick website on shipwrecks, the Wallace was built in Saint John in 1840. In April of 1841, it sailed from Liverpool, U.K., bound for Saint John with everything from "anchors to coffee mills, from spikes and nails to common pins; spoons, cutlery, and even paints."

But on May 23 it struck the Murr Ledges, since renamed the Wallace Rocks, near Grand Manan, and sank 3,000 feet.

"There was all kinds of misinformation about what it was carrying," said Allaby, who spent a lot of time hunting for a large volume of copper that wasn't actually there.

"There [were] all kinds of us competing for this so-called copper," said Allaby. "It was quite an adventure, neat experience."

Another shipwreck he's fascinated with is the Mavourneen, which sank in Bradford's Cove at the south end of Grand Manan in 1866 in dense fog with no loss of life.

Allaby said there wasn't any cargo on board the Mavourneen and when it sank, it just deteriorated in place.

"It's remarkably intact for a shipwreck," he said. "It was a good one to survey in detail … but it was a lot of work and perfected some new techniques in terms of rendering prospective [plots of shipwrecks]."

On New Year's Eve in 1819 a fierce gale in the Bay of Fundy capsized a schooner. All of the crew were lost, according to Allaby, except for the captain who made a makeshift sail on the stump of the mast near the bow of the ship and made it to the Nova Scotia shore. The schooner was called Perseverance, aptly named.

A spike in inmate deaths in Ontario has prompted dozens of advocacy groups, academics and others to send an open letter to the province's solicitor general calling for an "independent oversight body for correctional institutions."

After the video of the beating death of a young Black father by police in Memphis, Tennessee, officers in southwestern Ontario are speaking out about the killing.