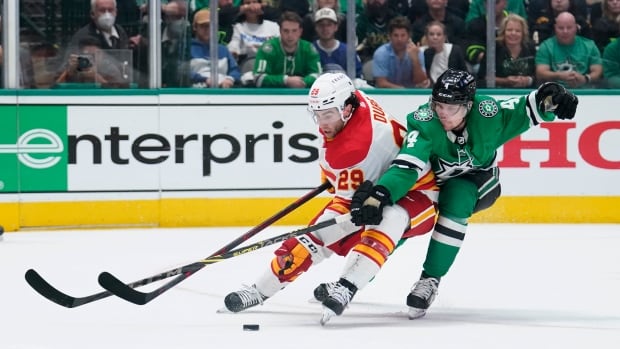 The Calgary Flames and Dallas Stars will take their playoff series the distance to a seventh and deciding game.

Dallas doubled the visiting Flames 4-2 on Friday to even up their conference quarterfinal at three wins apiece.

Stars defenceman Miro Heiskanen's goal late in the second period stood up as the game-winner for the Stars, who will try to bounce the Flames from the post-season Sunday in Calgary.

Roope Hintz and Michael Raffl also scored for Dallas with Tyler Seguin adding an empty-net goal in front of a sellout of 18,532 at American Airlines Center.

Michael Stone had a goal and an assist and Mikael Backlund scored in the second period to draw Calgary even before Heiskanen's game-winner.

"A hell of a game," Flames head coach Darryl Sutter said. "Just couldn't get the equalizer."

The Flames, 25-9-7 at the Saddledome in the regular season, will be under pressure to maintain their mastery of home ice and advance to the second round for the first time since 2015 and just the second time in the last 17 years.

"It's hard to win the last one and obviously a lot of us haven't been past the first round," Flames forward Elias Lindholm said. "Hopefully we get it done Sunday.

"That's why we fought so hard all year, to have home ice in Game 7. We're in a good spot, so we've just got to regroup and come back with a better effort on Sunday. We've got find a way to score more than two goals."

Teams tying a series 3-3 to force a Game 7 own an all-time series record of 88-96, according to NHL statisticians.

Markstrom didn't leave his net for an extra Flames attacker until less than a minute remained in the game as the Flames struggled to sustain offensive-zone pressure.

Barry Trotz was fired as head coach of the New York Islanders on Monday, with general manager Lou Lamoriello saying he felt the team needed a new voice.

Canada's Jessie Fleming came from the bench to aid Chelsea in its 4-2 win over the visiting Manchester United on Sunday to clinch a third straight FA Women's Super League title.

Joe Pavelski scored twice, including the game-winner, for the Dallas Stars in Saturday's 4-2 win over the Calgary Flames to take a 2-1 lead in their playoff series.

Search online for information on the Canadian Olympic Committee's bid to host the 2030 Olympics and you'll likely find yourself on a site called Vancouver2030.org, an official looking site that has its own Twitter account, registration page and invites you to "Reignite the Passion."

A look at key storylines in this year's Stanley Cup playoffs

The Tampa Bay Lightning won the Stanley Cup inside the NHL's 2020 post-season bubble, then repeated last July following a pandemic shortened campaign accented by one-and-done divisions based on geography.

The Canadian women's rugby sevens team held on to secure a fifth-place finish at the World Rugby Sevens Series tournament in Langford, B.C., with a 12-7 win over the rival Americans on Sunday.

Bianca Andreescu of Canada advanced to the third round of the Madrid Open with a victory against American Danielle Collins on Sunday.

The weather co-operated for Canada's critical matchup against World No. 1-ranked Australia on Saturday evening. The competition was a little more stingy.

Matthew Tkachuk scored a hat trick for the Calgary Flames in Wednesday's 9-6 win over the visiting Edmonton Oilers to open their playoff series.

The Battle of Alberta has all the makings of a classic

This is an excerpt from The Buzzer, which is CBC Sports' daily email newsletter. Stay up to speed on what's happening in sports by subscribing here.

7 takeaways from a weekend full of Game 7s

This is an excerpt from The Buzzer, which is CBC Sports' daily email newsletter. Stay up to speed on what's happening in sports by subscribing here.

Gaudreau's heroic OT winner lifts Flames past Stars in thrilling Game 7, move on to 2nd round

The Calgary Flames won a playoff series for just the second time in the last 17 years with Sunday's 3-2 overtime win over the visiting Dallas Stars in the seventh and deciding game of their series.

The Oilers aren't settling for the second round.

New York head coach Sandy Brondello was on her way to her team's Friday morning shootaround when she heard the "disappointing" news Russia had extended Brittney Griner's pre-trial detention another 30 days.

The Calgary Flames and Dallas Stars will take their playoff series the distance to a seventh and deciding game.

Detention of WNBA's Brittney Griner in Moscow extended for 1 month

The lawyer for WNBA star Brittney Griner said Friday her pre-trial detention in Russia has been extended by one month.

The Maple Leafs did everything they could to exorcise a long list of playoff demons.

Canadians Bianca Andreescu and Felix Auger-Aliassime advanced to the quarter-finals at the Italian Open on Thursday.

Coming off arguably their best collective performance ever at an Olympics having won six medals in Tokyo and finishing fifth out of 70 countries on the placing table, Canadian track and field athletes are now setting their sights on the upcoming athletics season.

The Maritime Women's Basketball Association (MWBA) was made for people like Ellen Hatt.

After bungling a breakaway in a previous game, Johnny Gaudreau made no mistake on his penalty shot.