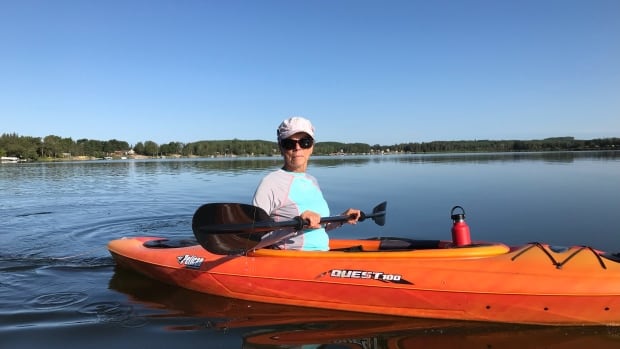 "To not even be able to perform your activities of daily living or have everything that you do impacted by pain … it takes its toll on you after a while," the Saskatoon resident and retired social worker said in an interview.

"It was just to the point where it was unbearable."

Nylen had been on the Saskatchewan surgical waiting list for a year in late 2021, and her doctor told her it would be at least two more years before she'd be able to get knee replacement surgery.

The surgical waiting list ballooned during the pandemic in Saskatchewan and other provinces, with COVID-19 taking up much-needed resources.

Saskatchewan had the worst wait times in Canada for hip and knee replacement surgeries in the first 18 months of the pandemic, according to the Canadian Institute for Health Information.

About 35,000 people are currently on the surgical waiting list, per the Ministry of Health.

Nylen decided she could no longer endure the pain and got surgery at a private clinic in Calgary in February.

But it was no small feat — the surgery cost $28,000, on top of travel and accommodation expenses.

Nylen said she recognizes she is privileged to have done that.

"We were very fortunate that I was able to access that money. But a lot of people don't have it and don't have the wherewithal to get to Calgary or the support. My husband has been an incredible support," she said.

Dr. Ian Lutz, a Saskatoon orthopedic surgeon specializing in hip and knee replacements, currently has the second-longest waiting list in the province — 18 to 24 months.

He said some of his patients have gone to Ontario, Alberta, the United States, Mexico and India for surgery.

"Some people have so much pain that they can't work and their pain wakes them up at night. I mean, it's terrible," Lutz said.