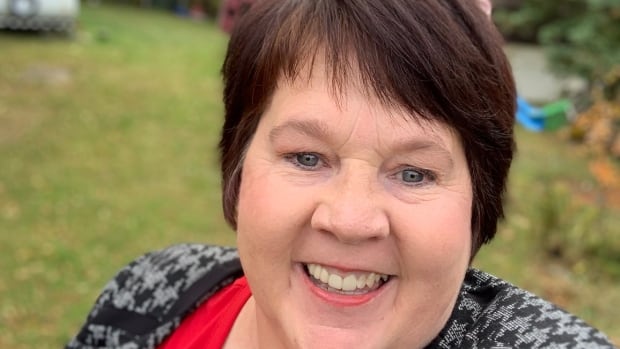 Ida Linehan Young's The Stolen Ones is the final novel in her historical-fiction series set in outport Newfoundland and Labrador, but she said for this novel she wanted to connect the past to the present.

The story is about two generations of family, separated by a century.

In the present, Darlene Carter and her teenage daughter Tiffany travel from their home in Boston to a small N.L. community to find out how they're related to a family there. At the same time, they're dealing with the death of Darlene's mother, all while navigating the COVID-19 pandemic.

"I did do a lot of research and I like to bring events to the forefront, so I think it's important that it is history, even though the characters are fictional," said Young.

The Stolen Ones, published by Flanker Press, is a contender for the N.L. Reads competition, running from November to February.

Young is going up against Bridget Canning's Some People's Children (Breakwater Books), Eva Crocker's All I Ask (House of Anansi Press) and We, Jane by Aimee Wall (Bookhug Press).

Each book has an advocate, and CBC Radio's Newfoundland Morning host Martin Jones will defend The Stolen Ones.

When Young started writing her latest novel, she said it was going to be another purely historical fiction work set in the late 19th century, in the same universe as her other books.

However, 20,000 words into the book, the pandemic struck and she didn't feel like writing anymore.

"And then Christmas came and I thought you know what, I'm going to write a duo-story and talk about the now. Because we were living in the now and talking about the past, and it was just like an epiphany. And I started writing," said Young. "By the end of December I had the book finished. So it was only within two weeks I had the 60,000 words done."

The Nolans' story is told through Peter's journals, which Darlene reads in a bid to find out how they might be related.

DNA tests and genealogical research also play a crucial role in Darlene and Tiffany's journey to uncover their family's past, and ultimately help reveal how two Americans are related to the Nolans of N.L.

But Young admits these types of tests can also expose old family wounds, as it does in The Stolen Ones.

"There's life and death in everything. And everything can't be all roses so I had to put some things in there to make it more believable. There is tragedy within everybody's life," said Young.

The Bonavista E.R. keeps closing. Every week, these residents rally against their 'nightmare'

The sound of honking filled the air near the Bonavista hospital at lunchtime on Wednesday.

When he was six years old in Kremenchuk, Ukraine, Sasha Kaplin's father told him to pick a sport and stick with it.

Fredericton had a surge of COVID-19 just after the holidays, newly released wastewater data indicates.

Quebec provincial police are investigating after four people were found dead in a burned-out house in Lanaudière early Thursday morning.

$5 million for Winnipeg Transit security team a good start, union says, but devil is in the details

The union for Winnipeg Transit workers says the city's investment in a transit security service is a good start to tackle the issue of safety, and will hopefully encourage some riders to once again take the bus.

Saskatoon resident Adrienne Stone has had just about enough of Sunwing Airlines, after months of confusion around her family's winter vacation booking.

Major cash is already being bid on liquor store permits in Saskatchewan, despite the auction only opening a few days ago.

Neighbours speak out about supervised injection site in Charlottetown

Some people who live and operate businesses close to 33 Belmont St. in Charlottetown — the site chosen by the provincial government to be a supervised injection site — expressed concern Wednesday about how it could impact property values.