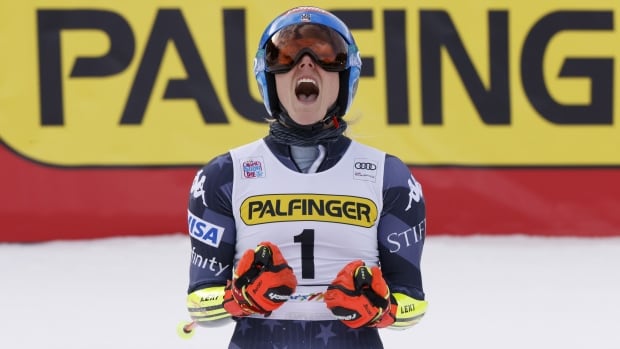 Shiffrin led from start to finish to win a giant slalom by a large margin and can now break Vonn's mark in a night slalom scheduled for Flachau, Austria, on Tuesday.

"I was so nervous this run. I have a rash on my face I was so nervous," Shiffrin said from Kranjska Gora, Slovenia. "I don't know why, maybe a little bit was because of 82. I just really wanted to ski well, and I did."

Shiffrin celebrated with a scream then bent over and rested her hands on her poles before kissing her skis in the awards ceremony.

"It was a fight. But it was pretty amazing conditions and I got a report from the coaches and they were like, 'It's really attackable, so just go for it,"' she said. "I've been in this position before and I've given it away and today I wanted to fight for it."

Britt Richardson of Canmore, Alta., picked up World Cup points with a 24th-place finish in her eighth World Cup strart while Cassidy Gray of Invermere, B.C. and Sarah Bennett of Stoneham, Que., missed out on advancing to the second run.

Vonn retired four years ago when injuries ended her pursuit of Stenmark's record.

Shiffrin and Vonn now each have 20 more wins than the next woman on the all-time list, Annemarie Moser-Pröll of Austria at 62.

While the often-injured Vonn required 395 races for her 82 wins, Shiffrin has done it in just 233 races. And at age 27, Shiffrin could compete for several more years and win many more races.

Shiffrin's achievement comes almost a year after a disappointing performance at the Beijing Olympics, when she competed in six events without winning a medal.

Winning this race, though, never really seemed in doubt.

On an overcast morning, Shiffrin was the first starter and laid down a much more aggressive opening run than either of her two trips down the steep Podkoren course on Saturday, when she finished in a tie for sixth.

U.S. labour Secretary Marty Walsh is expected to leave the Biden administration to run the National Hockey League Players' Association, according to two people familiar with his plans, and other media reports.

Click on the video players below to watch live coverage of the 2023 Arctic Winter Games in Wood Buffalo, Alta.

How women affected by oppression within hockey are fostering change

Tom Brady retires from NFL, insisting this time it's for good

Tom Brady, who won a record seven Super Bowls for New England and Tampa, has announced his retirement.

Canada spends millions on safe sport. It's not going where it's needed

This story is part of a continuing investigation by CBC News and Sports into abuse in amateur sport in Canada. Read all of the reporting here.