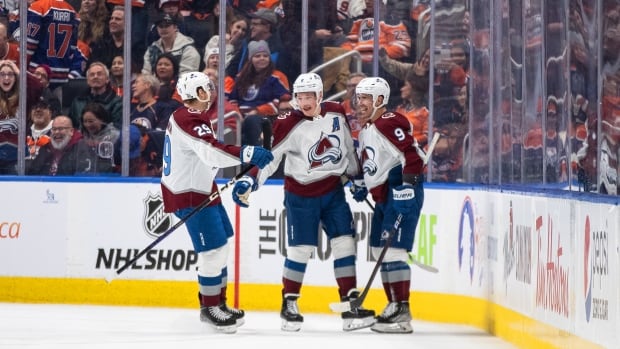 Cale Makar scored the overtime winner as the Colorado Avalanche came from behind to snap a five-game losing streak with a 3-2 victory over the Edmonton Oilers on Saturday.

Nathan MacKinnon and Brad Hunt also scored for the Avalanche (20-15-3).

Zach Hyman had both goals for the Oilers (21-17-3) who have lost six of their last seven on home ice.

Edmonton got the game's first goal just over a minute later on the power play as Connor McDavid sent a pass through the crease to Hyman in front and he directed the puck past Avs goalie Alexandar Georgiev.

The Avalanche kept battling, but couldn't buy a break, as Mikko Rantanen hit a post and Samuel Girard a crossbar in the early stages of the second.

The Oilers potent power play struck again with 4:55 to play in the middle frame as a Tyson Barrie shot caromed off the boards to Hyman in front and he chipped his second of the game and 20th of the season through Georgiev's legs. The goal survived a video review challenge for interference.

Colorado finally got one on the board 3:06 into the third period on a beauty as MacKinnon split the defence and muscled a puck over Skinner's shoulder for his 10th of the season.

The Avalanche tied the game with 11:41 to play in the third while the teams were playing four-aside as Hunt raced to keep a puck in at the zone and then snapped a shot past Skinner for his first of the season.

There was a frenetic final few minutes with golden opportunities for both sides, but it ended up going to extra time.

The Oilers hit two posts in overtime before Makar was able to pick the corner 2:09 into the bonus session.

It was the first meeting between the two teams since the Avalanche swept the Oilers 4-0 in the Western Conference final last season en route to their Stanley Cup victory. They will play again in Denver on Feb. 19 and then once more in Colorado on April 11. The Avalanche have been badly hit by injuries this season to key players and were without the services of Gabriel Landeskog (knee), Bowen Byram (lower body), Josh Manson (lower body), Pavel Francouz (lower body) and Valeri Nichushkin (ankle). However, forward Evan Rodrigues returned after missing the last two games with an upper body injury.

Out for the Oilers were Evander Kane (wrist) and Ryan Murray (back). Edmonton loaned forward James Hamblin to Bakersfield of the American Hockey League on Saturday. Oilers forward Jesse Puljujarvi suited up in his 300th career game. MacKinnon tied Anton Stastny for the fifth-most goals in franchise history.

Decriminalization yet another 'half measure' as B.C. confronts full-sized drug crisis, advocates say

More than six years and 10,000 deaths since the declaration of a public health emergency over the tainted illicit drug supply, B.C. remains a land of pilot projects and what many describe as "half measures."

He signed a will to give a church his Hamilton condo before dying. His partner calls it 'suspicious'

Sixteen days before he died, a Hamilton man was in hospital when he signed a handwritten will giving Saint Mina's Coptic Orthodox Church his condo.

Council looking for ways to limit aggressive panhandling in Windsor

From pandemic-related travel restrictions to extreme weather events, Canada's travel industry has navigated an unprecedented amount of uncertainty of late. And now, just as demand for travel has returned to its 2019 level, airlines are navigating their next patch of turbulence: a lack of qualified pilots.

Three more former players with the Lakehead University women's basketball team in Thunder Bay, Ont., have come forward with allegations of maltreatment against its former coach, in what the school's incoming president calls an issue of "great concern."

When a physician can't get a family doctor, you know there's a problem.

The Liberal government has told the Department of National Defence to drop its appeal of a court ruling that extends the deadline to submit a claim for a sexual misconduct class action settlement.

On the day of his funeral, disability advocates across the province recounted Ontario's former lieutenant-governor's positive impact in using his platform to further visibility and rights for people with disabilities.

Health Canada has launched a safety review of the psychological withdrawal symptoms associated with stopping or reducing use of a drug commonly prescribed to help women breastfeed.

After a decade of fighting the Qalipu band enrolment process, one advocate looks back

A long-awaited court battle over membership criteria for Qalipu First Nation will wrap up this week but one of the organizers of the challenge says regardless of the outcome, the fight isn't over yet.

The Stubborn Goat Gastropub in downtown Halifax has been damaged by a fire that broke out around 3 p.m. AT Monday.

The city of Chortkiv, Ukraine, has asked the city of Whitehorse to enter a sister city relationship — and it's finding warm feelings from its intended.

A property that includes fescue grasslands, forests and wetlands near Waterton Lakes National Park in southern Alberta has been purchased by the Nature Conservancy of Canada.

More than 2,200 people died in British Columbia from toxic drugs over the course of 2022, making it the second deadliest year on record.

Two men charged in the 2018 assault of a Mississauga father of two beaten within an inch of his life have been found guilty of aggravated assault but not guilty of attempted murder.

Alberta is no longer recommending Evusheld, a preventative COVID-19 therapy, because it does not work against the latest subvariants to take hold in the province.

John Haggie says he's stepping away from his roles as MHA and education minister to deal with a health problem.

Some searches are done, but other residential school sites in the northeast won't be checked for several years

Work is underway to see if there are any unmarked graves at former residential schools in northeastern Ontario.

Nova Scotia RCMP say the 911 service is experiencing technical difficulties across the province. Meanwhile, 911 service has been restored to some areas in New Brunswick and P.E.I.

911 services down in parts of New Brunswick

Some areas of New Brunswick have no access to 911 services.

Last week, when Postmedia announced it was slashing 11 per cent of its roughly 650 editorial staff across the country, journalists at the Montreal Gazette learned their newsroom could be hit even harder.

The case of a man discharged from hospital with no home to go to after suffering frostbite on his feet reflects "a really huge gap" between the medical system and homelessness sector, says the director of one of Winnipeg's biggest shelters.

One of the most visible players in Canada's online sports gambling market is lobbying the Saskatchewan government to adopt something similar to Ontario's model.

The yawning black hole that can be P.E.I.'s access to information system

In October of 2020, CBC News filed a freedom of information request with the P.E.I. government seeking an investigation report from the Island Regulatory and Appeals Commission on the transfer of land between Brendel Farms and Red Fox Acres Ltd., a company controlled by members of the Irving family.