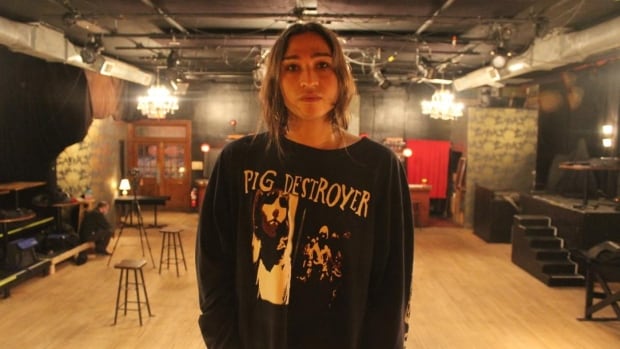 In one elegant move she swings herself up onto the stage. The gold curtain reflects a warm glow on her skin as she turns to face the empty concert hall.

"My favourite spot in the building? Looking out from this stage," says Eliza Kaheroton Santos on a December afternoon in Montreal's Mile End neighbourhood.

Santos is the cleaner of La Sala Rossa, affectionately known by locals as simply "Sala."

By day she carries crates of drinks up and down stairs, the soles of her sneakers leaving marks on freshly mopped floors. By night she sticks around to watch alternative music acts with her friends. She's an experimental noise musician herself and knows this stage well, performing multiple times here.

For Santos, Sala is another home outside the tight-knit community of Kanesatake where she grew up. A lot of her friends work — and play — here too. In fact, after several resume drop-offs and no response, it was her friends who nudged Mauro Pezzente — the man behind La Sala Rossa — to offer her the gig.

It's 2001 and the local musician and booker is on the hunt for a big room.

The show sold out in an hour.

The problem was, Casa's capacity is capped at 60 people. Fans who didn't score tickets were peeved the band wasn't playing at a larger venue. The rumblings throughout the Mile End music scene propelled Pezzente to find a new spot for the show.

Pezzente asked if he could rent the 250-person capacity concert hall upstairs for a show. The president said yes. As fate would have it, the Spanish social club was looking to rent the space since memberships and finances were dwindling.