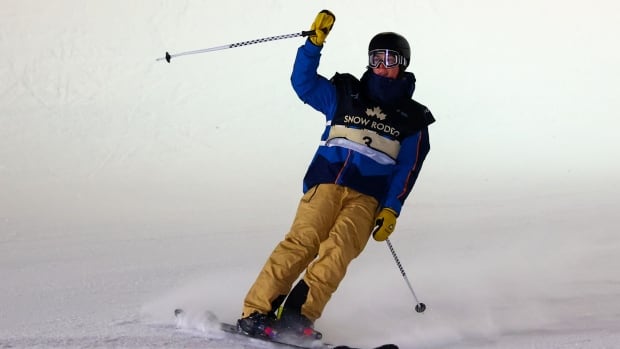 Mackay, 24, was one of three Canadians to reach the podium between the men's and women's competition.

Unlike his performance Thursday, the Calgary native had his best run of the day on his first one, scoring 93.40 and following it up with scores of 74.60 and 93.20 in his final two.

Despite his fellow competitors being bothered by the gusty winds during the event, MacKay remained unfazed. He also acknowledged that competing at home gave him an advantage.

"The wind made things pretty difficult, but I'm used to riding the halfpipe here in Calgary. I gave it my all on each run," he said.

Noah Bowman, also from Calgary, finished third with a high score of 88.00, placing just behind silver medallist Alex Ferreira of the U.S. (90.40).

"I'm really happy with my day. The conditions were pretty extreme but I was able to pull it off," Bowman said. "It was great to be able to get up onto the podium with Brendan, who was excellent."

On the women's side, Rachael Karker picked up her second medal of the week, this time winning silver in the ski halfpipe.

Karker, of Erin, Ont., who won bronze on Thursday, finished with a high score of 89.40.

Similar to Mackay, her best run was her first one.

"I feel really great and I'm so happy with my performance. It's so nice to be back on the podium, especially here in Canada," Karker said.

The 24-year-old finished just behind China's Gu Ailing Eileen who won her second straight gold medal with a top score of 92.80.

American Hanna Faulhaber placed third with her best score being 88.60.

U.S. labour Secretary Marty Walsh is expected to leave the Biden administration to run the National Hockey League Players' Association, according to two people familiar with his plans, and other media reports.

Click on the video players below to watch live coverage of the 2023 Arctic Winter Games in Wood Buffalo, Alta.

How women affected by oppression within hockey are fostering change

Tom Brady retires from NFL, insisting this time it's for good

Tom Brady, who won a record seven Super Bowls for New England and Tampa, has announced his retirement.

Canada spends millions on safe sport. It's not going where it's needed

This story is part of a continuing investigation by CBC News and Sports into abuse in amateur sport in Canada. Read all of the reporting here.