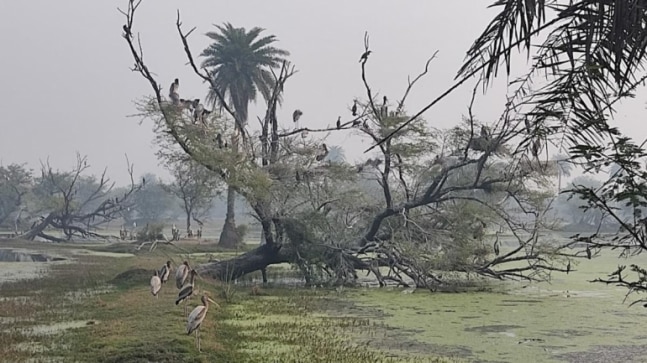 World Migratory Birds Day was celebrated in Agra on Saturday.

World Migratory Birds Day was celebrated on Saturday on the theme "Shut down your lights and allow migratory birds to return home safely", in Agra. The theme is based on the hypothesis that too much artificial lighting leads to the migratory birds losing their way, so outdoor lights should be shut down at night.

During the ceremony, it was revealed that Agra's Keetham bird sanctuary, which is spread around a vast man-made lake, plays host to over 100 species of migratory birds over the year. A research conducted by Nidhi Yadav and Himanshi Sagar of Dr BR Ambedkar university found that Agra witnessed the maximum number of wetland dependent birds.

Social activist and bird watcher Samir told India Today that the great white pelican, the dalmatian pelican, and flamingos are the largest birds that arrive at the Keetham sanctuary. Among the smaller birds, the little stints, sand pipers and wagtails frequent the sanctuary in winter.

KP Singh, an ornithologist at the Biodiversity Research and Development Society (BRDS) told India Today that April and May are the hottest months in Agra and at this time, foreign migratory birds start leaving Agra. In May and June, domestic migratory birds like paradise flycatchers, Indian pitta, golden oriole, painted storks, and Eurasian spoonbills start appearing on the local landscape.BRDS bird-watching guide Gajendra Singh said that some species of vultures have also started reappearing on Agra's landscape. Apart from the Egyptian vulture, bird watchers have been seeing the Himalayan griffon vultures and Sirius vultures in Agra for the past two years.Dr. K P Singh said that the birds follow a migratory path, which is called their flyway. The entire lifecycle of these birds is restricted to this flyway, which is a geographical area. More than 40 percent of these migratory birds are dependent on the wetlands falling in their flyway, so the wetlands need to be preserved.

At least seven soldiers have been killed after an army vehicle they were travelling in fell into Shyok river in Ladakh.

St Stephen’s vs Delhi University: What does the 1992 SC judgement say?

Find out what the 1992 Supreme Court judgement says in the St Stephen's vs Delhi University case.