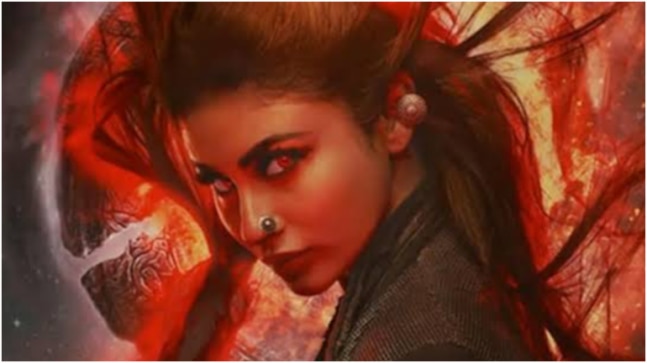 Mouni Roy played the role of Junoon in Brahmastra. In an exclusive chat with IndiaToday.in, Mouni reveals if she will be a part of Part 2 and 3.

Mouni Roy as Junoon in the newly released Brahmastra, has been garnering a lot of attention. As the main antagonist of the fantasy world created by Ayan Mukerji, the actress got a meaty role to pull off. An excited and overwhelmed Mouni shared with IndiaToday.in that the love she is receiving has been unprecedented. The one question that remains in everyone’s mind is if Mouni will continue to feature in the next two parts of the Brahmastra universe.

When asked to comment on the same, Mouni remained tight-lipped and told IndiaToday.in, “I hope I do. I am manifesting it. But I honestly don’t know. Hands on my heart, I really don’t know. Ask Ayan to bring me back.”

Mouni played the role of Junoon in Brahmastra, who is a loyal disciple of Dev. The second part of the trilogy will further expand the story of Dev, who is one of the most powerful powers in the universe. While the question on who will play Dev remains a mystery, the names of Ranveer Singh and Hrithik Roshan have been popping up time and again.

Brahmastra stars Amitabh Bachchan, Nagarjuna, Ranbir Kapoor and Alia Bhatt in pivotal roles. The movie released on September 9 and has already minted more than Rs 300 crore worldwide. The film was produced by Dharma Productions and Disney.

The Dadasaheb Phalke Award for 2020 will go to Bollywood veteran actress Asha Parekh. It is the highest recognition in the field of Indian cinema.

Hrithik Roshan will be reprising Vijay Sethupathi’s role as Vedha in the Hindi remake of Vikram Vedha. During a chat, he was asked to react about comparisons.

Vijay Deverakonda and his brother Anand Deverakonda watched the final T20 match together in Hyderabad. They were also joined by Sonu Sood in the stands.

Eisha Singh revealed that she auditioned for Kareena Kapoor’s role in Laal Singh Chaddha. The actress recently made her Bollywood debut with Middle-Class Love.

AR Rahman recently opened up about remix culture in an interview with IndiaToday.in. He revealed that the intention of the original composer gets distorted.

Tushar Kalia won this season of Khatron Ke Khiladi 12. Meanwhile, let's take a look at the times this season made headlines.

Priyanka Chopra's late Daughter's Day post is too special. The actress shared a picture with her daughter Malti and a picture of herself with her late father Ashok Chopra.

Directed by R Balki, Chup released on September 23. The film is doing decent business at the box office collections.

Ranbir Kapoor reveals sleeping with wife Alia Bhatt is a struggle. This is why

In a new interview, Ranbir Kapoor spoke about Alia Bhatt's sleeping positions. The actor revealed why it's a struggle sleeping with his pregnant wife.

Kamal Haasan is glad that Bharathiraja is back home from hospital, wishes him good health

Ram Charan completes 15 years in cinema. Dad Chiranjeevi has the best wish for his son

The 38th episode of Kaun Banega Crorepati 14 aired on September 27. During the episode, host Amitabh Bachchan donated some money to contestant Shobha.

Kareena Kapoor took to social media to post the sweetest birthday wish for Ranbir Kapoor. She shared a throwback picture of the actor.

Trisha revealed that Mani Ratnam asked her not to get too chatty with Aishwarya Rai Bachchan on the sets of Ponniyin Selvan. The two will be seen as princesses Kundavai and Nandini, respectively.

Deepika Padukone was reportedly hospitalised at Mumbai's Breach Candy Hospital after she complained of uneasiness on September 26. The actress is doing stable now.

Kevin Feige finally reveals why Chadwick Boseman’s character in Black Panther was never recast. The actor passed away in 2020 after battling colon cancer.

Allu Arjun to start shooting for Pushpa 2 in October! Details

Hrithik Roshan was seen teaching Alcoholia hook step to his Vikram Vedha co-star Saif Ali Khan. Did he grasp it? Find out!

Ranbir Kapoor and Alia Bhatt have finally found time to resume work on their new love nest. The couple was spotted inspecting construction of their bungalow today, September 27.

Falguni Pathak spoke about song recreations amid her feud with Neha Kakkar over Maine Payal Hai Chhankai remake. The singer said that she is fine with her songs being remade, however, one shouldn't spoil it.