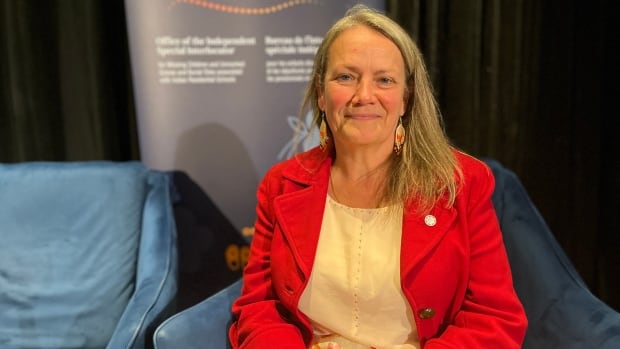 Just months into her mandate, the special interlocutor for missing children and unmarked graves associated with residential schools says major concerns about access to records, lands, and funding have been expressed by residential school survivors, families, and communities.

That's according to a progress report Kimberly Murray submitted to Justice Minister David Lametti on Nov. 10.

"I don't think there's anything surprising in the report," said Murray, who is Kanien'kehá:ka from Kanesatake, Que.

"It's what everyone's been saying for the last year about the barriers and concerns that everyone's facing. But… some of the things that communities are investigating are quite shocking."

Murray was appointed by the federal government in June with a two-year mandate to provide recommendations for a federal legal framework for the treatment and protection of burial sites of children at former residential schools.

Since beginning her mandate, she's hosted a national gathering that brought over 300 attendees to Edmonton in September, and has met with several communities that have embarked on searches of their own.

Murray said that through these conversations, it's clear a major barrier is accessing records from institutions like Library and Archives Canada, the National Centre for Truth and Reconciliation (NCTR), and church entities.

"There is a real need for this open access to records," said Murray.

"It's quite clear that there's a lot of lack of knowledge of how to access some of the information so that they can find their loved ones."

Murray said there is a need for more transparency and information on how to access records in a timely fashion.

"The delay in getting the records is really not acceptable," she said.

"Communities have been waiting months and months to get access to the records."

The delays are something Raymond Frogner, head of archives at the NCTR, knows all too well. He said after the discoveries of unmarked graves at former residential school sites last year, the centre has been inundated with requests.

There is currently a backlog of 450 inquiries for individual survivor sets of records, and they are also working with over 35 communities across the country that are doing unmarked burial research.

As Canada and other wealthy countries scramble to hire nurses from overseas, there are growing concerns that the exodus of health-care workers from developing countries will push their stretched medical systems closer to a crisis point.

David Eby will be sworn in as B.C.'s 37th premier on Friday — but he'll be the first to do so on Musqueam Indian Band territory.

Civil society groups, Indigenous activists and scientists are standing together at the COP27 climate conference in Sharm el-Sheikh, Egypt, and demanding firm action be taken next month at the UN Biodiversity Conference that will be hosted in Montreal.

It's the exhaustion on parents' faces that hits you first.

A Winnipeg park has been renamed in honour of an elder and former Sagkeeng First Nation chief who died last year, and dedicated much of his life to telling others about his experience at a nearby residential school.

Would you sign up to catch a deadly disease and live in isolation for weeks? These friends did

On an overcast afternoon in Halifax, Amy Mullin has wrapped up her remote workday — filled with emails and video calls — and is getting ready for yet another night alone.

With no place for hearings, some in Manitoba First Nation may have to travel hundreds of kilometres for court

Manitoba's provincial court has shut down on Shamattawa First Nation after it couldn't find any space consistently available to hold legal proceedings in the remote northern community — potentially forcing residents to travel hundreds of kilometres to appear before a judge.

It was a nail-biter, but NASA finally got the first rocket in its Artemis mission off the ground.

Discrimination, racism and confusion are "near-universal" experiences for Indigenous people who use status cards in everyday transactions, according to a new report from the Union of B.C. Indian Chiefs (UBCIC).

Earth's population reaches 8-billion milestone, but this upward trend may not continue for long

How Idle No More transformed Canada

When Sylvia McAdam recalls the early days of Idle No More in November 2012, she remembers the excitement and beauty of Indigenous people coming together.

The Artemis mission to the moon is being guided by Kepler, Newton and Einstein

NASA's Orion capsule is a triumph of technology and engineering. But its complicated, figure-eight path as it travels from the Earth out beyond the moon and back owes everything to some fundamental laws discovered starting hundreds of years ago.

Why there's excitement and skepticism about new Alzheimer's drug lecanemab

This is an excerpt from Second Opinion, a weekly analysis of health and medical science news emailed to subscribers. If you haven't subscribed, you can do that by clicking here.

William Gaywish returned to his home community in southwestern Manitoba hoping to heal, after finding himself in a bad place and experiencing addictions while he lived in Winnipeg.

A new mRNA vaccine targeting all known flu strains in a single shot is showing early promise in animal studies and is opening the door to a wide range of possibilities with the vaccine technology — including potentially preventing the next influenza pandemic.

Just months into her mandate, the special interlocutor for missing children and unmarked graves associated with residential schools says major concerns about access to records, lands, and funding have been expressed by residential school survivors, families, and communities.

Canada is leading the way on health care for astronauts — to be used here on Earth, too

As humans once again begin our foray back to the moon, there are some very serious questions about how to ensure we can do so safely.

B.C. Children's Hospital has activated emergency triage to manage a mounting volume of patients with respiratory illness, including flu and COVID-19, B.C.'s health minister has confirmed.

On a cold November morning, Lester Balfour heads out onto the land with a group of boys to check his rabbit snares about a 40 minute drive north of Norway House Cree Nation.

This story is part of Situation Critical, a series from CBC British Columbia reporting on the barriers people in this province face in accessing timely and appropriate health care.

Members of Norway House Cree Nation raised concerns about information sharing, environmental impacts and community employment at a consultation for a potential nickel mine in the area.

The Assembly of First Nations (AFN) and the federal government are moving forward with steps to improve how historical grievances are resolved.

Why 'stay home when sick' matters so much right now

"Stay home when sick" came before "mask up" as a message to prevent spread early in the COVID-19 pandemic. Now that influenza, RSV and other viruses have joined the mix, the original advice holds true more than ever, say some Canadian doctors.

Countries adopted a hard-fought final agreement at the COP27 climate summit early on Sunday that sets up a fund to help poor countries being battered by climate disasters — but does not boost efforts to tackle the emissions causing them.