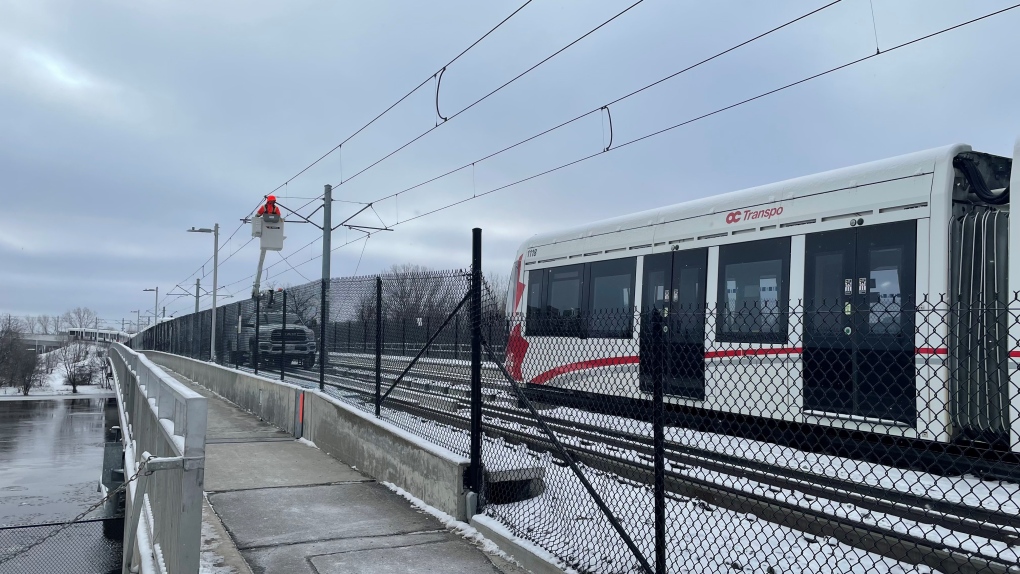 Trains have been stuck in the area of Hurdman Station since Wednesday night’s freezing rainstorm. An attempt to clear ice on Friday resulted in damage to the overhead catenary system that powers the train (the OCS) and a train that was sent to remove one of the other stuck trains on Saturday damaged the wires again, causing it to become stuck.

Speaking on Newstalk 580 CFRA's "CFRA Live with Andrew Pinsent" Sunday morning, the city's director of transit service delivery and rail operations, Troy Charter, said the focus is to get back to full service as quickly as possible, but it might not be done Sunday.

"We need to make sure that it's done safely and when we do return to service, that it'll be a reliable service as well," he said. "The focus is to get back to service as quickly as possible, but it is likely, it is possible that this will continue into Monday, for sure."

The western loop of the system is running between Tunney’s Pasture and uOttawa stations. In the east, trains are running between Blair and Tremblay. The R1 bus is replacing service between Rideau and St. Laurent stations.

Charter, said Saturday that keeping sustained R1 bus service into the workweek would likely lead to route cancellations and delays across other parts of the bus network.

“Our commitment is to continue to provide R1 with as frequent a service as possible, but I do need to be 100 per cent transparent and honest in this regard, we do know that there will likely be other impacts to increasing cancellations in other parts of the system,” he said in an interview. “The teams are working through that to try to minimize those impacts. And we’re going to continue to work through this all weekend.”

Nearly five years after Matthew Staikos was gunned down in Toronto, the family of the tech CEO has renewed a $250,000 reward in the unsolved murder case.

Prime Minister Justin Trudeau is presenting the federal government's offer for billions in new health-care funding to the provinces and territories at a highly anticipated meeting in Ottawa today. At the first in-person meeting of all First Ministers in years, Trudeau is set to outline how much money his government is willing to provide, and what his expectations are for improving care.

Canadians now believe they need $1.7 million in savings in order to retire, a 20 per cent increase from 2020, according to a new BMO survey. The eye-watering figure is the largest sum since BMO first started surveying Canadians about their retirement expectations 13 years ago.

Canada's premiers are in Ottawa to meet with the prime minister over access to more health care funding. But that's not all Alberta Premier Danielle Smith has on her mind.

Eleven dogs have been seized from a Sherwood Park home, and an Edmonton man is facing charges.

Officers were called to Rhema Gold Physiotherapy on Jan. 28 after the victim reported the assault to staff.

A city staffer in Chestermere is now facing a formal charge of assault after police were made aware of an incident while she was working at city hall last month.

Hundreds of customers who scan QR codes for restaurant menus across Canada are being surprised by secret menus instead, revealing the hidden costs behind the food they eat.

Three people have been charged after more than $400,000 in drugs and cash were seized from two homes and a vehicle after a seven-month-long investigation in Edmonton.

A man is dead following a fire that broke out in southeast Calgary Thursday morning.

Justice Minister David Lametti says he will "look at" a federal policy that restricts gay and bisexual men from donating to sperm banks in Canada, after CTV News exclusively reported on Wednesday that a gay man is taking the federal government to court over it.

Alberta Premier Danielle Smith expressed her concerns with the federal government's proposed 'just transition' legislation directly to the prime minister on Tuesday, saying she hopes the two can find some common ground.

How more than 100 women realized they may have dated, been deceived by the same man

An Ontario man is being accused of changing his name, profession and life story multiple times to potentially more than 100 women online before leaving some out thousands of dollars.

Montreal police say a high school in the Saint-Leonard borough is in lockdown Tuesday afternoon after a threat was made by a possible student.

PM Trudeau presents premiers $196B health-care funding deal, including $46B in new funding

The federal government is pledging to increase health funding to Canada's provinces and territories by $196.1 billion over the next 10 years, in a long-awaited deal aimed at addressing Canada's crumbling health-care systems with $46.2 billion in new funding.

A mangled bicycle and a smashed windshield point to the severity of the crash that sent a Victoria cyclist to hospital with non-life-threatening injuries on Monday.

A 50-year-old woman is dead after two semis collided on Highway #1 near Indian Head.

Saskatoon Police Service (SPS) is restricting traffic on range road 3062 as they investigate a suspicious death in the area.

A Winnipeg family is in mourning after two relatives were killed by an earthquake that caused destruction across southeast Turkiye and neighbouring Syria.

Calgary police say a pedestrian who was hit and killed by a CTrain on Tuesday morning appears to have fallen off the platform.

B.C. to make National Day for Truth and Reconciliation a paid statutory holiday

The British Columbia government has introduced legislation to make Sept. 30 a paid statutory holiday marking the National Day for Truth and Reconciliation.

London police officers and fire officials are investigating after a fatal fire in the east end of the city Monday afternoon.

A former medical student who claims he fatally shot a fellow student in self-defence during a drug deal in Halifax denied Tuesday he planned to kill the man and steal the marijuana he was carrying.