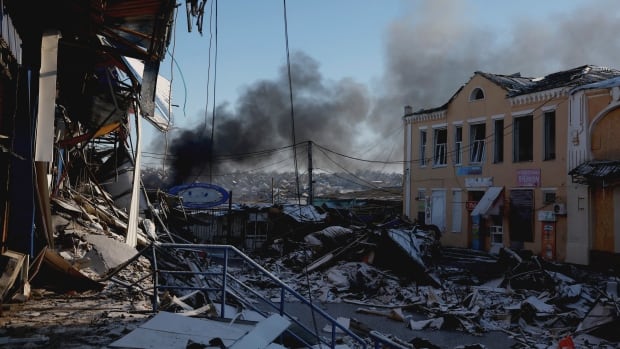 Russia's Defence Ministry said on Saturday its forces in Ukraine would maintain a ceasefire it unilaterally declared to observe Orthodox Christmas until midnight, despite Ukraine rejecting the truce offer.

In its daily briefing, the ministry said its troops had only returned artillery fire when fired upon by Ukrainian forces, whom it accused of shelling civilian areas, something Russian forces are often accused of doing by Kyiv.

Exchanges of artillery fire were reported in Kreminna and Bakhmut in Eastern Ukraine after the start of Moscow's order for its forces to maintain a unilateral truce from midday Friday until the end of Saturday.

Ukraine rejected Moscow's ceasefire offer as a cynical trick designed to give Russian forces the chance to rest and re-arm, and said it would continue to try to recapture territory seized by Moscow.

Service members of the 80th Separate Air Assault Brigade positioned near Kreminna in the Donbas region said there were no signs of a ceasefire.

"Nothing has changed since midday, the shelling continues. They wanted some quiet and tried to mislead us, hoping we would believe it. They have been lying all the time since 2014 saying 'ceasefire, ceasefire' while shelling us," said a soldier who introduced himself with his nom de guerre, Psikho.

"The situation today is exactly the same as yesterday, the day before yesterday, last week and last month. Nothing has changed despite the enemy apparently declaring a ceasefire over Christmas," said Mykola, the unit commander.

The Kremlin issued Putin's message after the Russian leader attended an Orthodox Christmas Eve service on his own inside a Kremlin cathedral rather than joining other worshippers in a public celebration.

In his message, accompanied on the Kremlin website by an image of him standing before religious icons, Putin made it clear that he saw the Russian Orthodox Church as an important stabilizing force for society at a time he has cast as a historical clash between Russia and the West over Ukraine and other issues.

"It is deeply gratifying to note the enormous constructive contribution of the Russian Orthodox Church and other Christian denominations in unifying society, preserving our historical memory, educating youth and strengthening the institution of family," Putin said.

In his nightly televised address on Friday, Ukrainian President Volodymyr Zelenskyy praised the United States for announcing $3.75 billion US in weapons and other aid for Ukraine and its neighbours on NATO's eastern flank, calling it "a very powerful package."

"For the first time, we will get Bradley armoured vehicles — this is exactly what is needed. New guns and rounds, including high-precision ones, new rockets, new drones. It is timely and strong," he said.

Rescue and recovery efforts in Turkey and Syria have been happening around the clock since powerful earthquakes shook the two countries, bringing down buildings and burying thousands of people inside the homes where they slept.

A lawyer for President Joe Biden's son, Hunter, asked the Justice Department in a letter Wednesday to investigate close allies of former president Donald Trump and others who accessed and disseminated personal data from a laptop that a computer repair shop owner says was dropped off at his Delaware store in 2019.

The U.S. central bank raised its target interest rate by a quarter of a percentage point on Wednesday, and promised "ongoing increases" in borrowing costs as part of its ongoing battle against inflation.

4 suspects in killing of Haitian President Jovenel Moïse charged and in U.S. custody

Four key suspects in the killing of Haitian President Jovenel Moïse were transferred to the United States for prosecution as the case stagnates in Haiti amid death threats that have rattled local judges, U.S. officials announced Tuesday.

Allies of Mikheil Saakashvili, the jailed former president of Georgia, said on Tuesday authorities were refusing to move him to an intensive care unit despite his condition being "life-threatening" and doctors saying he needs urgent treatment.