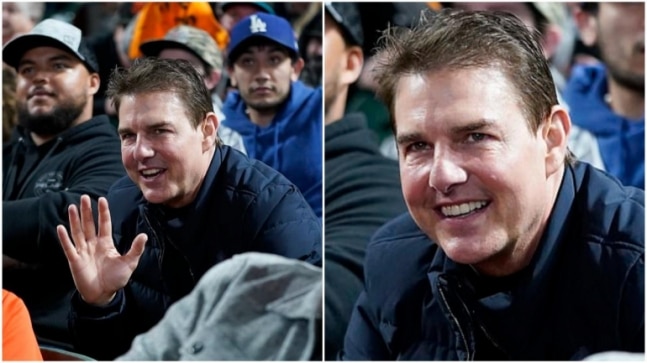 Tom Cruise is unrecognisable in the latest photos that are going viral on social media. His pictures left fans surprised as his face looked swollen than usual while attending a baseball game in San Francisco, US.

Shah Rukh Khan once said he wanted to host KBC till he was 60. Tuesday Trivia

Shah Rukh Khan hosted Kaun Banega Crorepati in its third season in 2007. However, did you know that he wanted to be KBC host till he turned 60?

The teaser of Sooryavanshi's love song Mera Yaaraa is out. The film features Katrina Kaif and Akshay Kumar in lead roles.

Sushant Singh Rajput's sister shared an old photo of the late actor with Chhichhore team to congratulate them on receiving the National Film Award for Best Hindi Film. She wrote that the late actor is "present with us in spirit".

Kareena Kapoor Khan shared a new selfie with her mom Babita. "While the mother eats kheer the daughter poses," she wrote.

KBC 13 contestant Pallavi Mahida failed to answer this Rs 3.2 lakh question. Can you?

Alec Baldwin fired a prop gun that killed a woman during the filming of Rust in New Mexico recently. According to the US media reports, the actor was rehearsing a scene where he had to point the prop gun at the camera lens.

On the 46th episode of Kaun Banega Crorepati 13, Big B was left amused by contestant Dhaval Nanda. They had many candid conversations on the sets of KBC 13.

Rajinikanth was honoured with the Dadasaheb Phalke award and Dhanush received a National Film Award in the Best Actor category for Asuran. Proud daughter and wife Aishwaryaa shared pictures on social media.

Sardar Udham shows hatred towards British, jury on not sending film to Oscars. Fans are furious

A jury member explained that Sardar Udham wasn't sent to Oscars as it 'projects our hatred towards the British.' Fans have shown their anger over the statement on social media.

The makers of Tadap released two teaser videos to introduce the characters played by Tara Sutaria and Ahan Shetty in the film. The trailer of the film will be out on October 27.

Ishaan Khatter and Ananya Panday are dating and going pretty strong, though neither has officially confirmed the same. In Ananya's time of crisis, Ishaan is standing beside her and supporting her and her family in every way possible.