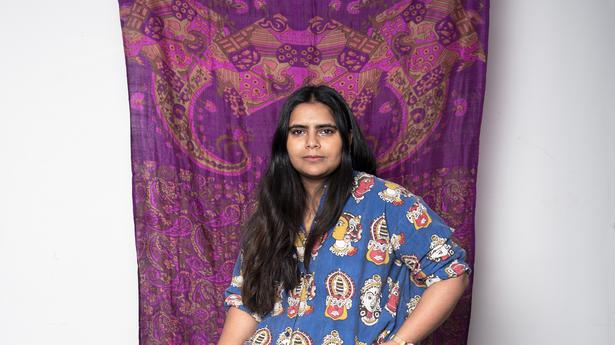 Photographer Spandita Malik’s Nari series, printed on fabric and accentuated with traditional embroidery, breaks away from the colonial lens

A stark commentary on gender violence and identities of women in India, 27-year-old Spandita Malik’s documentary photography breaks away from the aesthetics of what she calls “the colonial lens”. Born in Chandigarh and based in Kansas City, USA, she is the only Indian woman in The 30’s New and Emerging Photographers to Watch 2022 list, announced in January. Touted as the “go-to outlet to discover up-and-coming photographers” by Time (2015), The 30 invites nominations for budding photographers every year through visual journalists, curators, filmmakers, and professional photographers. Spandita was nominated by Elizabeth Krist, who worked at the National Geographic for 21 years.

“I met Elizabeth at a portfolio review for The New York Times [NYT] on March 7, 2021. Applicants get to choose their reviewers; I chose her,” says Spandita, a visiting assistant professor (under AICAD teaching fellowship) at the Kansas City Art Institute, over phone . In the portfolio, Elizabeth particularly liked Spandita’s Nari project. “She told me she’d been looking at different projects in documentary photography, but Nari falls under a new philosophy of documentary photography. She was excited about the social practice area and the new language.”

Spandita applied for The 30 in June last year and sent 28 artworks from three series — Nari, Home Obscured and Vadhu. While Home Obscured and Vadhu were created during the pandemic, Nari is an ongoing project. It documents Indian women who survived gender-based abuse through photographs printed on fabric and accentuated with traditional embroidery.

“I have a problem with documentary work done in India for the last few decades. It usually shows a western perspective — high-profile photographers would come and do grandeur projects with rich contrasts and beautiful images of poverty. And I have grown up looking at such pictures, thinking that is what photography looks like, ” she says. “When I got the chance to take photographs of women in India, I wanted to relinquish that colonial lens, that eye, that aesthetic. The way I could see that work was by relinquishing control.”

The journey of Nari, her first project, began in March 2019, when Spandita received a travel grant for her thesis at the Parsons School of Design, New York. She traversed Lucknow, Jaipur and villages in Punjab, spending a minimum of two-and-a-half weeks in each place, interviewing women who had survived rape and domestic violence. “The project is heavily influenced by the 2012 Delhi gang rape. I went to study in the capital soon after the incident and wanted to highlight the issue of rape in India,” says the photographer, who started researching on the statistics. “While I was researching the project in 2018, the Kathua case happened. One of my professors suggested that I go back to India to work with women who had gone through abuse.”

Everywhere she went, Spandita connected with women through NGOs. Most were training them in traditional embroidery to make them financially independent. So, in Lucknow it was chikankari; in Jaipur zardozi and beadwork in appliqué; and phulkari in Punjab. “Though most women visited the centres, some worked from home because they were not comfortable stepping out or weren’t allowed to go. Those were the women I wanted to photograph and interview. In their case, there was always a middle person who took orders and material from the centre to them. I went to their homes and clicked their pictures. I would print out the images on fabric and ask the women to embroider her portrait. Each woman got her own image that was transferred onto the fabric of the region — khadi in Jaipur, khaddar in Punjab, and voile in Lucknow. The reason I did this was because I wanted each woman to have control over her own identity in the way that she was perceived through these photographs,” she shares.

In the pictures, women hid their faces with embroidery, some turned their silver jewellery into gold, and others did needlework to adorn their backgrounds with colourful patterns to make it seem like they were sitting inside a castle. “Opening up and talking about abuse isn’t easy, even when you are trying to do that with a friend,” she says. “With these women, I had to build trust before jumping into uncomfortable conversations.”