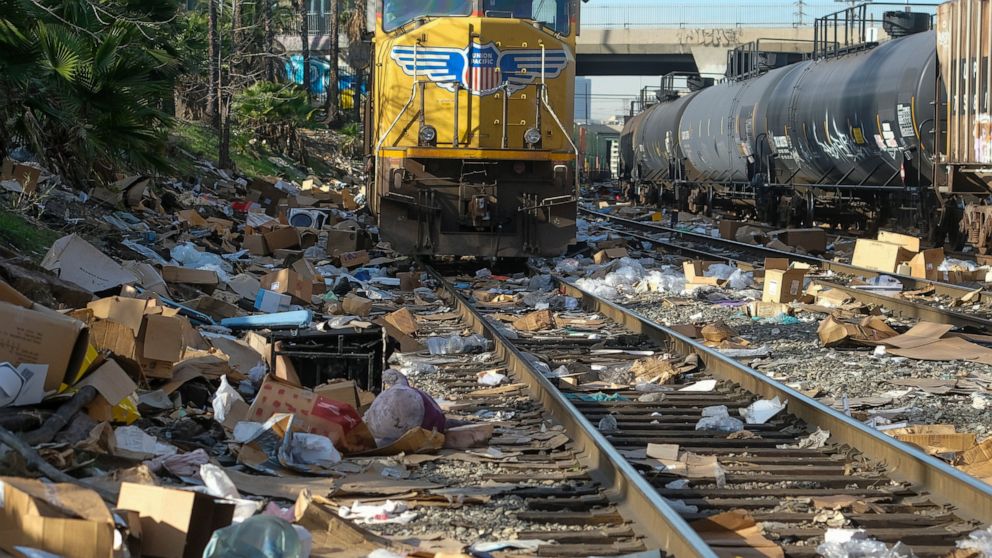 LOS ANGELES -- Thieves have been raiding cargo containers aboard trains nearing downtown Los Angeles for months, taking packages belonging to people across the U.S. and leaving the tracks blanketed with discarded boxes.

The packages are from retailers including Amazon, REI and others, CBSLA reported Thursday. The sea of debris left behind includes items that the thieves apparently didn’t think were valuable enough to take.

While CBSLA cameras were on the scene, one person was spotted running off with a container used to hold small packages, and a Union Pacific railroad police officer was spotted pursuing two other people who were apparently going through packages.

The scene was the same in November, when NBC4 showed thousands of boxes discarded along the tracks lined with homeless encampments northeast of downtown in the Lincoln Park area.

British Prime Minister Boris Johnson is fighting for his career and he has one constant refrain: Wait for Sue Gray

In Greece, unvaccinated people 60 and up face monthly fines

Greece has imposed a vaccination mandate for people 60 and older, as its vaccination rate remains below the European Union average and a spike in infections has put sustained pressure on Greek hospitals

The Biden administration on Tuesday quietly launched its website for Americans to request free at-home COVID-19 tests, a day before the site was scheduled to officially launch

Chinese state media say parcels mailed from overseas may have spread the coronavirus in Beijing and elsewhere, despite doubts among overseas health experts that the virus can be transmitted via packaging

Poland’s health officials say that the country has entered a new, fifth wave, in the coronavirus pandemic, predicting that it it will peak in mid-February at about 60,000 new infections per day or even more

Australia has reported a record high of COVID-19 deaths, and its second-largest state declared an emergency in hospitals to cope with surging patient admissions and a staffing shortage due to the coronavirus

Thick ash on an airport runway was delaying aid deliveries to the Pacific island nation of Tonga, where significant damage was being reported days after a huge undersea volcanic eruption and tsunami

A federal judge has ordered the U.S. Fish and Wildlife Service to revisit part of its decision not to protect Yellowstone National Park’s bison as an endangered species

Hawaii to require visitors to the state receive a COVID-19 vaccine booster if they want to skip quarantine.