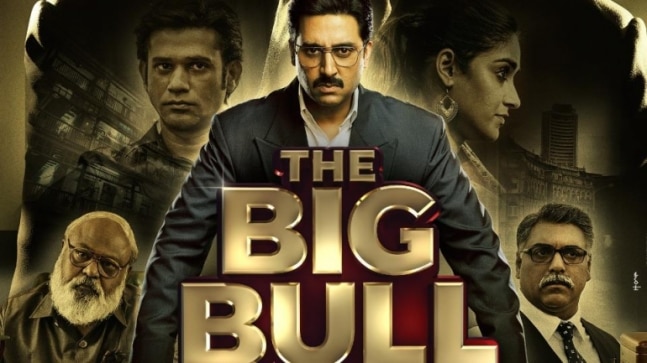 What is the drawback of making a film on a story which is widely known? Well, the answer is obvious, it will be judged at every step with no mercy at all. Especially after an acclaimed web series, which can undoubtedly tick all the boxes for being the best show of 2020, you are up for some harsh comparisons. And Abhishek Bachchan very well knew about it while working on Kookie Gulati's The Big Bull. Despite an impressive performance by the actor, the film, which is a fictionalised and Bollywoodised version of the story of the very infamous stockbroker Harshad Mehta, falls short at many junctures because of the benchmark set by Hansal Mehta's web series Scam 1992: The Harshad Mehta Story. So the story begins in 2020 when at the launch of her book The Big Bull, journalist Meera Rao (played by Ileana D'Cruz) narrates the story of Hemant Shah (played by Abhishek Bachchan), who revolutionised the stock market in the 80s and 90s. Along with his brother Viren Shah (Sohum Shah) and a trusted aide (Sumit Vats), he takes on the established system, becomes one of the richest persons in the country in a really short period of time and helps many others make money in the stock market. The story then navigates to the 80s when Hemant is still a salaried man and lives in a rented room in a chawl with his brother Viran and their mother (Supriya Pathak). How can we not have a love angle when we are talking about a Bollywood story, despite it having a financial setting? Oh, we have it here: A man falling for a girl of his locality, his friends planning a fake birthday party to set them up, Her parents' conditions for her prospective groom and him doing it all to get the girl. From a love song to a rap song by YouTuber CarryMinati and Wily Frenzy, the film has it all. We then see Hemant Shah climbing up the success ladder really quick. Before we could adjust ourselves to Shah's life in the chawl, we see him already making money in the stock market and, in a snap, he is meeting some of the hotshots of the industry. The change is so swift that it becomes difficult for you to absorb it and align yourself with the story. But is the momentum kept constant throughout the film? Well, no. Whenever Bollywood creeps in, the film slows down making way for drama and emotional upheaval, which ends up making the film-watching experience boring. We see Hemant Shah romancing his wife Priya Shah (Nikita Dutta) in the picturesque locations in Delhi. He also buys an entire market of chaat because his wife wants to have golgappas. How romantic, you say? Well, no comments!

Shanaya Kapoor can't live without her enemy. Any guesses?

Radhika Apte opens up about turning director with The Sleepwalkers