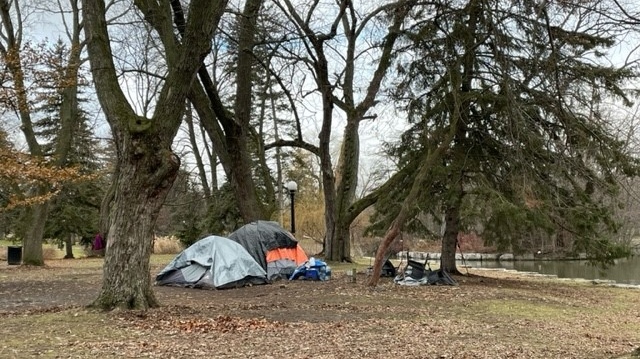 Tent removal notices issues by the City of Kitchener staff at Victoria Park have sparked a dispute with advocates for those experiencing homelessness.

The city is defending its actions and says it is working with residents to ensure their safety and security.

"So that would mean anybody that is occupying this area would be forced to leave,” said advocate Sean Hubert. "It's actually quite dramatic for that to happen in the middle of winter. They’re not sure where they're gonna go. They haven't been told if there is somewhere for them to go."

In an email to CTV News, the city says three notices were left on tents that appeared abandoned last week as part of the city staff’s daily checks.

The email also says, "if residents are in fact using these tents, they will not be removed."

According to the city, there were about six active tents last week, with fewer than 10 residents living in them.

'We don't turn anyone away': How organizations are helping Winnipeg's most vulnerable during cold snap

An extreme cold warning is in effect for Winnipeg, and as temperatures dip to dangerous levels, some shelters are at – or even over – capacity.

As the B.C. government decriminalizes small amounts of hard drugs, critics note there are still not enough treatment resources for the users seeking them.

Mike Schreiner responds to Liberal plea for a greener leader

Ontario Greens leader and MPP for Guelph, Mike Schreiner, said he is going to take time to "think about the arguments" following an open letter requesting him to run for the Ontario Liberal Party leadership.

A family in the remote community of Peawanuck, Ont., is dealing not only with the death of their young daughter, but the loss of everything they owned in a Jan. 28 house fire.

The grisly aftermath of an alleged fatal shooting was described Monday during the murder trial of a former Dalhousie University medical student accused of killing a fellow student in Halifax seven years ago.

An Ontario woman said she was shocked when she had to pay for repairs after her car was struck from behind by a pick-up truck and the driver fled the scene of the collision.

Hybrid Parliament should be here to stay, say MPs in new report

The hybrid sitting structure and electronic voting system should become permanent features of the House of Commons, according to a new report from MPs on the Procedure and House Affairs Committee.

A new political poll crafted by ThinkHQ Public Affairs says if an election were held in Alberta today, voters would be split on who should form the next government.

More than 100 Evraz employees will be laid off from Regina's steel mill in February, according to the company.

Quebec RCMP say they rescued a man over the weekend who became lost in the woods in heavy snow while trying to cross the border into the United States.

Time is of the essence to bring in and enforce new long-term care standards: authors

Prime Minister Justin Trudeau says the federal government is talking to provinces and territories about new standards for the quality, design and operations of long-term care homes in Canada.

After failing to recruit hundreds of orderlies internationally, Francois Legault's government is now dangling the same solution to the nursing shortage. If the past is any indication of the future, the chances are slim that Quebec will see thousands of professional nurses coming to the rescue of the health-care system.

The Ottawa police homicide unit is investigating after a man was stabbed to death at an apartment in the city's south end overnight.

Regina lawyer Tony Merchant has launched a class action lawsuit on behalf of some Home Depot customers who agreed to receive receipts electronically.

Loblaw will not be extending its price freeze on No Name brand products, but vows to keep the yellow label product-pricing flat 'wherever possible.'

A 20-year-old man has been arrested and charged after police say he caused more than $5,000 worth of damage to an Edmonton Transit Bus and threatened a female passenger, acts that drew condemnation from Alberta's premier.

Canada's financial intelligence agency is stepping up the fight against the illicit wildlife trade by taking aim at the criminals who reap big profits from the global racket.

While Londoners have generally united behind The London Plan’s philosophy that the city must slow sprawl through intensification, delivering on that promise is fueling division.On Monday, a pair of higher-density developments became the latest test of council’s commitment to intensification.

Frigid temperatures expected to hit the Maritimes later this week

Frigid temperatures are expected to hit the Maritimes later this week as a wave of Arctic air moves into the region.

Patients of an east Ottawa clinic say they've been left in the lurch after learning they would need to find new family doctors because their doctors were closing their medical practices.

Saskatoon police are investigating a suspicious death in the city's Mayfair neighbourhood.