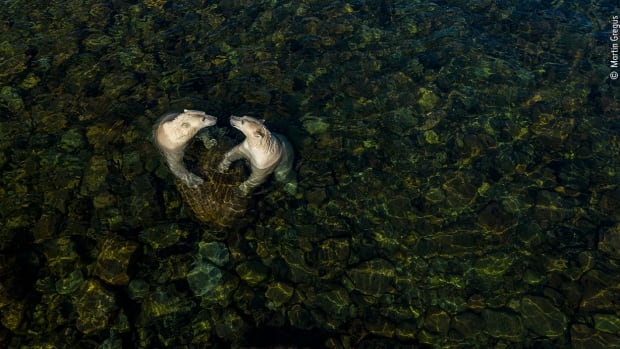 Intimate photos that provide a rare window into the lives of polar bears, birds and insects have earned several Canadians recognition in this year's Wildlife Photographer of the Year Awards.

The winners of the 2021 edition of the annual competition, developed by the Natural History Museum in London were announced Tuesday evening. This year's competition drew 50,000 entries from 95 countries.

The grand prize winner was "Creation" by French underwater photographer and biologist Laurent Ballesta. It features camouflage groupers leaving their annual mating frenzy under a full moon in a lagoon in Fakarava, French Polynesia.

Martin Gregus of Vancouver, B.C., won the Rising Star Portfolio Award, for photos of polar bears enjoying the summer in Hudson Bay, including a mother napping with a cub who is missing a leg and two adult females playing together in the shallow water.

"These bears really did share with us many intimate moments and they shared their story with us," he said. "In doing so, they allowed us to sort of share it with the world.

Gregus and his team of two others were invited by a tourism company to scout out a new area near Churchill, Man., during the tourism lull caused by the pandemic in 2020. "It was an amazing opportunity," he recalled.

Intimate photos that provide a rare window into the lives of polar bears, birds and insects have earned several Canadians recognition in this year's Wildlife Photographer of the Year Awards.

Two First Nations creators from Manitoba have landed TV deals amid a growing appetite among mainstream audiences for Indigenous storytelling.

William Shatner blasts off to where no 90-year-old has gone before: space

Actor William Shatner blasted off Wednesday for his wildest role yet: riding a rocket into space, courtesy of Star Trek fan Jeff Bezos.

Although Shirley Cheechoo hasn't appeared on screen in over a decade, the Cree actor and filmmaker says it's an honour to be recognized for her career and contributions to the film industry.

Woman rocked awake by meteorite chunk crashing into her bedroom

Ruth Hamilton had been asleep for hours in her Golden, B.C., home when she awoke to the sound of her dog barking, giving her a moment's notice before a rock from outer space hurtled into her bedroom.

China on Tuesday pledged about $290 million to establish a fund to protect biodiversity in developing countries.

A First Nations leader in northern Ontario says a new recommendation from a government oversight body would bring the standard of care provided to grieving Indigenous families to a bare minimum if it's implemented.

A NASA spacecraft named Lucy rocketed into the sky with diamonds Saturday morning on a 12-year quest to explore eight asteroids.

Where's the line on who gets COVID booster shots?

This is an excerpt from Second Opinion, a weekly roundup of health and medical science news emailed to subscribers every Saturday morning. If you haven't subscribed yet, you can do that by clicking here.

A First Nations student has re-designed the Edmonton Elks logo for an orange T-shirt raising awareness of residential schools, with proceeds going to sports programs for Indigenous youth.

How to get the most out of a home energy audit

Hello, Earthlings! This is our weekly newsletter on all things environmental, where we highlight trends and solutions that are moving us to a more sustainable world. (Sign up here to get it in your inbox every Thursday.)

What would make the COP26 climate conference a success?

"A turning point for humanity."

Métis representation at the federal table going forward is unclear since the Manitoba Métis Federation, one of five governing members on the Métis National Council (MNC), dropped out of the organization.