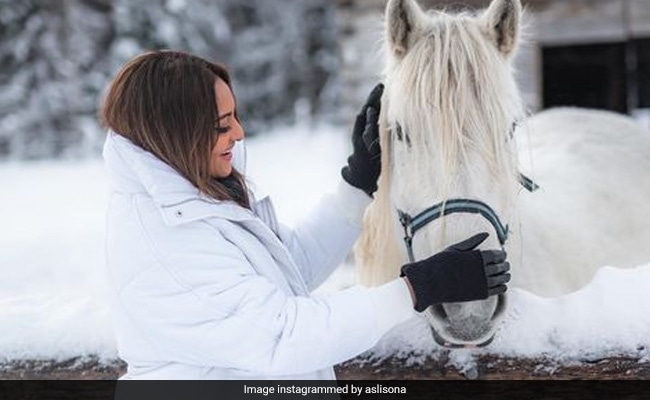 From enjoying the time in the snow to saying hello to a reindeer, Sonakshi’s album looks straight out of a fairy tale.

Another day, another update from Sonakshi Sinha's “winter wonderland”. The actress was in Finland to mark the holiday season. From enjoying the time in the snow to saying hello to a reindeer, Sonakshi's album looks straight out of a fairy tale. Don't miss the picturesque location. Sonakshi looks stunning in her white puffer jacket. Sharing the pictures, the actress wrote, “Winter wonderland? Nope… its @apukkaresort! Coziest cabin, lots of snow, reindeer love, furry horses, tents that keep you warm and the best coffee…Can't wait to be back.”

Before, Sonakshi Sinha also shared a montage from her time in the snow-capped region. Oh, and, she also made a snow angel. Along with the video, she wrote, “I don't care what you say… Santa Claus is real!!! I crossed over to the arctic circle, I met him… and some reindeers, and I made snow angels for the first time, ice skated for the first time, went hunting for the northern lights and came back with some amazing pictures of me with the moon, ate food in a glass igloo, went partying in an empty nightclub made of ice, rode a snowmobile for the first time…It's so cold but how am I melting??? Rovaniemi, I love you.”

Anil Kapoor's Throwback Glory Over The Years. See His Post

Anil Kapoor also shared a note on his journey in cinema

Viral: Shah Rukh Khan In A Behind-The-Scenes Pic From The Sets Of Jawan

SRK was last seen in the smash hit Pathaan

Pathaan is unstoppable at the box office