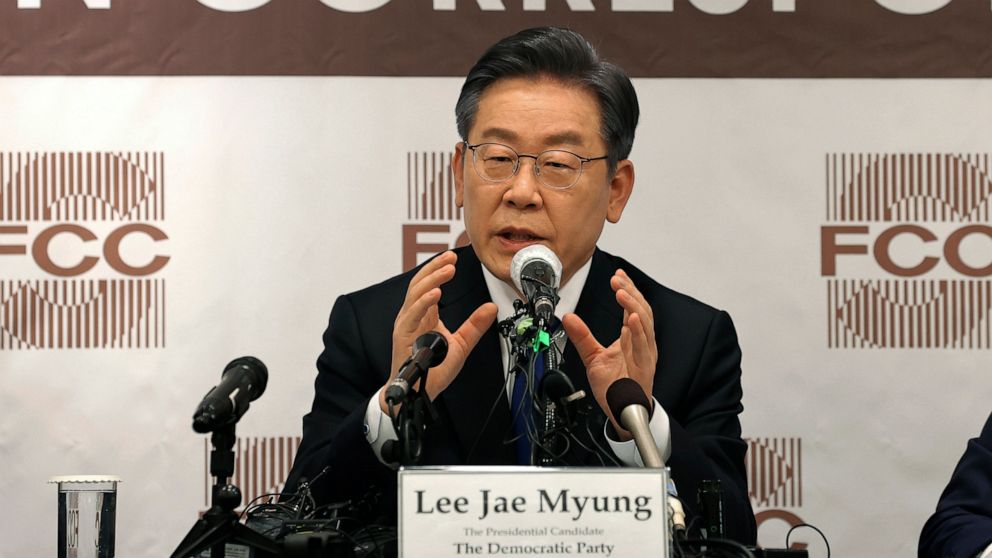 The South Korean governing party’s presidential candidate says he will continue a conciliatory approach toward North Korea if elected and questioned the effectiveness of U.S.-led economic sanctions in pressuring the North to abandon its nuclear ambitions

SEOUL, South Korea -- The South Korean governing party's presidential candidate said Thursday he will continue a conciliatory approach toward North Korea if elected and questioned the effectiveness of U.S.-led economic sanctions in pressuring the North to abandon its nuclear ambitions.

The comments by Lee Jae-myung, who represents President Moon Jae-in’s liberal Democratic Party, come as nuclear negotiations between North Korea and the U.S. remain frozen over the issue of a relaxation of the crippling U.S.-led sanctions in exchange for steps by North Korea to wind down its nuclear weapons program.

Lee has been locked in a tight race in the March election with conservative candidate Yoon Suk Yeol, who has vowed a tougher stance on North Korea and promised to pursue stronger military cooperation with Washington and Tokyo to cope with North Korea’s advancing nuclear threat.

In a meeting with foreign media, Lee stressed that South Korea should take a leading role in dealing with North Korea, reflecting concerns in Seoul that it is increasingly losing its voice in international efforts to resolve the nuclear standoff.