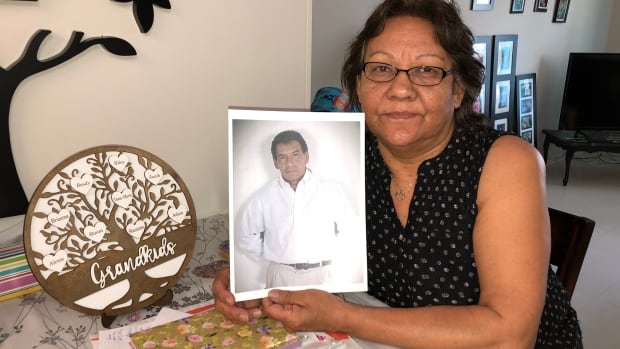 Susan Chief is experiencing loss all over again after her brother's death.

He was a part of the Sixties Scoop, and following his death in the U.S. earlier this year, she wanted to bring his remains home to Manitoba but ended up in a dispute with his adoptive family.

The Sixties Scoop is the name for a series of policies by provincial child welfare authorities between the 1950s and the 1990s which saw thousands of Indigenous children taken from their families and communities and placed with non-Indigenous foster or adoptive parents, losing their cultural identities as a result.

The Chief family lived in Birch River, a community close to Swan River, Man., about 485 kilometres northwest of Winnipeg. There were nine siblings taken from the family. Daniel Ross and one of his brothers were sent to a family in Minnesota.

Chief said she reconnected with Danny, 59, online, only a couple months before he died in Florida at the end of March after a heart attack.

Chief, 78, now lives in Winnipeg and said he told her he wanted to be buried in Duck Bay, Man., with his birth parents.

"He said, 'You know, if something ever happens to me, if I ever die,' he said, 'All I want is to go to Duck Bay to be buried beside mom,'" she said.

Chief said Ross expressed a desire to come home for a visit, maybe to stay, just weeks before he died.

Chief found out from a Facebook message that he had died.

She said she has been trying for months to work with her brother's adoptive family to settle his estate. Chief said his adoptive sister organized everything, including making the decision to have him cremated and sent back to Minnesota.

Chief said his adoptive sister agreed to plan to bring his ashes to Manitoba, but then plans kept changing.

"All of a sudden I got a call… She said, 'Susan, I'm sorry to tell you, but we're not going to be going to Winnipeg or Duck Bay, Danny is going to be buried here.'"

Chief said the adoptive sister told her it was because his other birth brother, who also lives in the United States, did not want Danny to be buried in Manitoba.