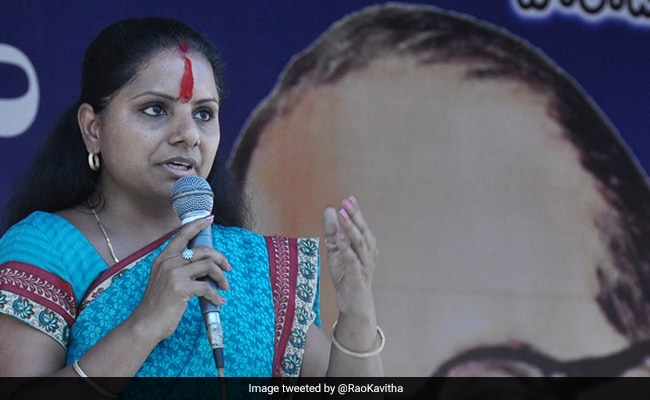 Kalvakuntla Kavitha also asked the Union Minister to tell the people of Telangana on why did the Modi Government fail to set up central universities like IIT and IIM in Telangana in the past eight years if its rule.

Escalating the attack on the centre over the failed promises to Telangana, Telangana Rashtra Samiti (TRS) leader Kalvakuntla Kavitha today posted a series of questions to Home Minister Amit Shah who is on a day-long visit to Hyderabad. Ms Kavitha comes hours after her brother and Telangana minister KT Rama Rao or KTR's open letter to the senior BJP leader on the "injustice" being done to the southern state by his party. Shri @AmitShah Ji welcome to Telangana !! please tell the people of Telangana when will the central government clear the following ::Dues of Finance Comission Grants : Over Rs 3000 croresBackward Region Grant : Rs 1350 croreGST Compensation: Rs 2247 crore 1/5

Woman Trampled to Death By Elephant in Tamil Nadu

Malu (40) was attacked and killed by the wild elephant past midnight on Saturday near her house in Ovalley Farm.

The proposed policy will be applicable to all government departments and entities.

In 8 Years, Haven't Given A Single Reason To "Hang Head In Shame": PM Modi

PM Narendra Modi said, "I have spared no effort in my service to the nation in the last eight years. I have neither allowed, nor personally done any such work that will make you or even a single person of India hang their head in shame."

The name of Aryan Khan, son of superstar Shah Rukh Khan, has been cleared in the drugs-on-cruise case

The Bhagwant Mann-led Aam Aadmi Party government had been cracking down on VIP culture in the state since coming to power earlier this year.

The consumer affairs ministry along with the Advertising Standards Council of India (ASCI) held a virtual meeting on Friday with stakeholders, including e-commerce entities, to discuss the magnitude of fake reviews on their platforms.

Tripura Ex-MLA Quits Trinamool In Setback Ahead Of Crucial Bypolls

Ashis Das, a leader from the Scheduled Caste community, had joined the Mamata Banerjee-led Trinamool Congress last year after quitting the BJP.

COVID-19 India: The active cases comprise 0.04 per cent of the total infections. The national COVID-19 recovery rate was recorded at 98.75 per cent, the ministry said.

25 Injured In Bus Accident In Jammu And Kashmir

Udhampur bus accident: The bus, bound from Jammu to Doda, overturned in the Battal Ballian area in Udhampur, said the police.

"We, who live in and around the Indian Ocean, must own and bear primary responsibility for peace, stability and prosperity in the region," Union Minister Sarbananda Sonowal said

Rajasthan Triple Suicide: One of the children was a 4-year-old boy and the other was a 27-day old infant. Two of the women were pregnant.

"The elephants travelled at least 7 km from one garden to another, causing panic among the people," an officer said.

The statue has five messages of Mr Karunanidhi engraved, including opposition to Hindi imposition and the creation of an oppression free society.

The statue has five messages of Mr Karunanidhi engraved, including opposition to Hindi imposition and the creation of an oppression free society.

"You Vote A Chief Minister, Not Just MLA": Yogi Adityanath In Uttarakhand

"For the first time since it became a district in 1997, Chamapwat has got an opportunity to elect a Chief Minister and not just an MLA. You should not waste this opportunity," Yogi Adityanath said

Nawab Malik was arrested by the Enforcement Directorate in February in connection with a money laundering probe linked to the activities of gangster Dawood Ibrahim and his aides.

As per a Geological Survey of India survey, around 222.88 million tonnes of gold reserve, including 37.6 tonnes of mineral-rich ore, are present in Jamui district.

4-Year-Old Kidnapped, Raped In Rajasthan, Accused On The Run: Police

The girl was fast asleep in her hut when the accused allegedly kidnapped and raped her.

Maharashtra Woman Arrested For Cheating Investors Of Over Rs 1.8 Crore

The Noida police tweeted out a short video of the stunt followed by the arrest of the three men.

Sriya Lenka is trained in Odissi and other forms of contemporary dance.

Sriya Lenka is trained in Odissi and other forms of contemporary dance.