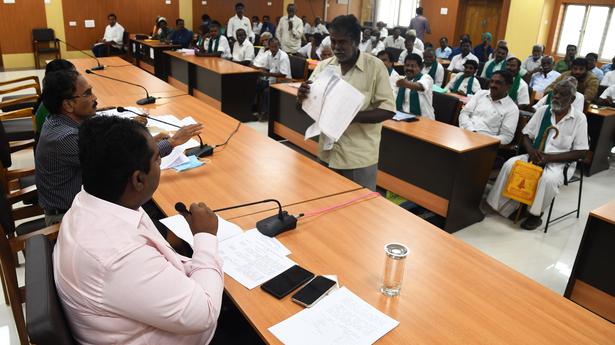 With the Public Works Department having sent a proposal to the government seeking release of water from Vaigai dam for irrigating the first crop in the double crop region of Madurai on June 2, the district administration has asked the farmers to prepare themselves accordingly.

This was informed at the farmers’ grievance redress meeting chaired by Collector S. Aneesh Sekhar at the Madurai Collectorate on Friday. Joint Director of Agriculture T. Vivekanandan was present.

The Collector said the State government was implementing various schemes for the welfare of farmers. Madurai District recorded a total rainfall of 1090.80 mm in 2021 and 153.09 mm so far this year. There is an adequate stock of agricultural inputs and fertilizers for farmers, he said.

M.P. Raman, a farmer from Usilampatti, urged the authorities to take steps to set up a Jasmine perfumery in Madurai district. He said flowers from Usilampatti, Chellampatti and Sedapatti were being sent to a private perfumery in Nilakottai in Dindigul district. If a perfumery is established in Madurai, the tonnes of jasmine produced in the region could be sent there and it would also improve the livelihood of farmers.

An official from the Horticulture Department said that jasmine supply must be consistent throughout the year to sustain the operations of such a perfumery. The Collector asked whether the farmers were willing to form a farmers-producers organisation in this regard.

He said that first a feasibility study must be done to set up a cold storage unit in the region for keeping the jasmine flowers fresh. The farmers also stressed the need for adequate coconut nurseries in the district.

The farmers urged the authorities to remove ‘seemai karuvelam’ (Prosopis juliflora) from waterbodies, take steps to set up adequate Direct Purchase Centres and removal of encroachments from waterbodies. The farmers sought solutions for effective pest control.