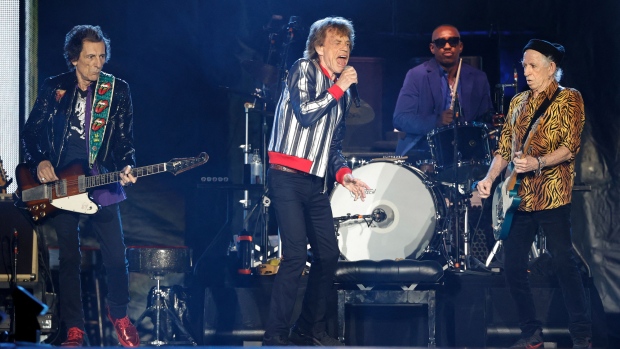 The Rolling Stones have retired their classic song 'Brown Sugar', which begins with a slave narrative and sexualizes young Black women.

Mick Jagger told the Los Angeles Times that the band had phased the song out of their concert lineups.

"We've played 'Brown Sugar' every night since 1970, so sometimes you think, 'We'll take that one out for now and see how it goes,'" he said. "We might put it back in."

Keith Richards told the Times he hopes to be able to play some version of the song in the future.

"I'm trying to figure out with the sisters quite where the beef is. Didn't they understand this was a song about the horrors of slavery? But they're trying to bury it. At the moment I don't want to get into conflicts with all of this s---," he said. "But I'm hoping that we'll be able to resurrect the babe in her glory somewhere along the track."

'Squid Game,' Netflix's newest hit series from South Korea, is the streaming services' biggest launch ever, beating out 'Bridgerton' for the top spot

'Squid Game,' a brutal Netflix survival drama about desperate adults competing in deadly children's games for a chance to escape severe debt, hit a little too close to home for Lee Chang-keun.

Netflix stands by Dave Chappelle despite criticism over trans remarks

Netflix is defending Dave Chappelle's new comedy special after it has been criticized as transphobic by some LGBTQ2S+ advocates, artists and employees.

'No Time to Die' wasn't a box office blowout. Here's why

"No Time to Die," the latest entry in the James Bond franchise, notched an estimated $56 million at the North American box office this weekend, according to its studio, MGM.

Paul McCartney has revisited the breakup of The Beatles, flatly refuting the suggestion that he was responsible for the group's demise.

Timothee Chalamet has teased a first look at his portrayal of iconic candy man Willy Wonka in the upcoming film 'Wonka.'

Netflix said Friday that it had fired an employee for disclosing confidential financial information about what it paid for Dave Chappelle's comedy special 'The Closer,' which some condemned as being transphobic.

Africa's largest film festival kicks off Saturday in Burkina Faso amid both the COVID-19 pandemic and a growing jihadi insurgency in the West African nation that has killed thousands of people and displaced more than 1 million in recent years.

A sugar candy featured in the wildly popular Netflix series 'Squid Game' is causing a stir in Montreal. At Claude & Claudette Depanneur, a shop in St-Henri, Robert Kim sells Korean fare, including dalgona.

Adele makes music comeback with new single 'Easy On Me'

British songstress Adele made her highly-anticipated music comeback on Friday, releasing her first new record since her 2015 Grammy award-winning album "25."

Neil Young and Crazy Horse are coming out with 'Barn,' a new studio album they made while cooped up during the COVID-19 pandemic.

Rolling Stones retire 'Brown Sugar' but 'might put it back in' lineup, Mick Jagger says

The Rolling Stones have retired their classic song 'Brown Sugar', which begins with a slave narrative and sexualizes young Black women.