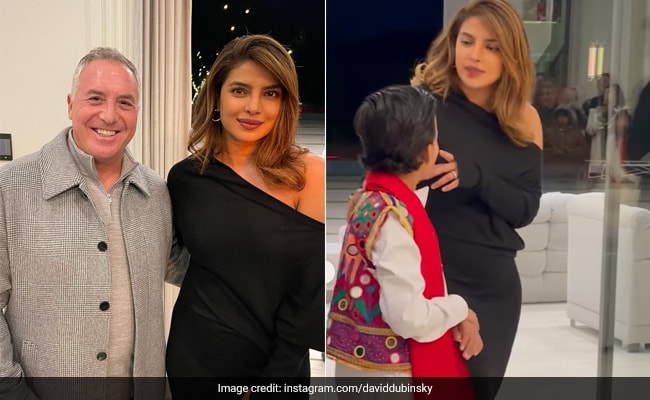 Priyanka Chopra recently hosted a screening and reception of the Gujarati film Chhello Show (The Last Show) at her Los Angeles home. Pan Nalin's Chhello Show (The Last Show) has made it to the Oscars 2023 shortlist in the Best International Feature Film category. Director Pan Nalin and child artist Bhavin Rabari also attended the event. The producer David Dubinsky shared many pictures and a video on his Instagram handle. In a video, Priyanka talks about the times of single-screen theatres and how her father used to bunk school to watch films. She also asked Bhavin the one movie he watched before doing the film, and to this, he replied, "Dangal."

Priyanka Chopra can be seen in an all-black ensemble and paired her look with black boots. On the other hand, Chhello Show actor Bhavin can be seen in a traditional ensemble. Sharing the post, David Dubinsky captioned it as, "With Priyanka Chopra, actress, model, and producer (married to Nick Jonas) at the movie screening and reception of Last Film Show, a coming of age drama of a boy from a remote village in India who discovers the joys of the movie theater just as digital projection changes the game. It is India's submission to the Academy Awards and was just shortlisted in Best International feature film category. Available on Netflix."

Here have a look:

The couple got married in Khandala last week

Now that is called a perfect throwback

The video shows a mother elephant guiding her calf along a forest path.

"The Most Critical Artery": Anand Mahindra's Comment On Delhi-Mumbai Expressway

The expressway will cover a distance of 1,450 km and it will reduce the travelling time between Delhi-Mumbai to 12 hours.

Sushmita Sen Was Asked A Question About Beauty. Her Wonderful Reply

"I don't think he is an actor anymore, he is an emotion," said John Abraham

"I have great respect for him as an artist and even as a human being," said Deepika

Shah Rukh Khan On Pathaan's Success: "Thank You For Bringing Life Back To Cinema"

Masaba Gupta Shares Backstory Of Designer OOTD: "Was Waiting For The Day I Could Afford"

"I admire Azzedine Alaia and was waiting for the day I could afford to get my first dress from the couturier," wrote Masaba

Hrithik Roshan And His Family Host K-Pop Star Jackson Wang At Their Home: "The Connect Was Instant..."

"We welcome you into our family...," wrote Pinkie Roshan

"I knew in that exact moment I had to be part of the film and I am thrilled to start this journey," Sanjay Dutt said

Watch: Husband Surprises Wife By Getting Her Portrait Tattooed On His Arm

The man's wife is shocked to see this tattoo and exclaims, "Oh my God." As per the post, the man surprised the woman on her birthday.

Jackson Wang arrived in Mumbai to perform at the Lollapalooza global music festival.

The video is trending big time on social media

"His presence of mind and surroundings is something we all have learnt from him," said Deepika Paukone

Bigg Boss 16: Nimrit Kaur Ahluwalia Is The First Finalist Of The Season

Sushmita Sen's Ex-Boyfriend Rohman Shawl Gave Her An Aarya 3 Shout Out. Her Reply

"I'm so glad I got not just your nose but also your shoulders to take on the world," wrote Masaba Gupta