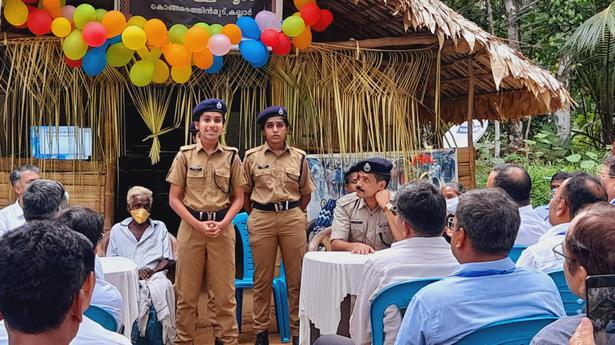 The police officers who were visiting the State capital to know about the Kerala Police as part of a study-cum-cultural tour were accompanied to the kuttipallikoodam by student police cadets (SPCs) of Government Vocational and Higher Secondary School, Vithura, their teachers, and police officials.

Sreebala P.S., an SPC cadet who is a class 10 student, said the cadets were a bit nervous about meeting the IPS officers who, they assumed, would have a serious demeanour. However, the IPS officers were very friendly and interacted with each cadet, says an excited Sreebala. “They recounted the advantages they had in life, unlike children in tribal settlements who had no television or Internet connection to help them study. They appreciated the role played by the SPC in the education of tribal children through setting up of the kuttipallikoodams.”

The visitors also contributed a laptop for teaching information technology in the kuttipallikoodams. The Vithura school has set up four kuttipallikoodams in their grama panchayat, while one kuttipallikoodam has come up in Tholicode panchayat. The kuttipallikoodams were an important initiative taken up by the SPC during COVID-19 to provide academic support to tribal children. These continue to function with the support of the police, teachers, and the cadets with the aim of providing training to students in the tribal settlements so that they can be nurtured into professionals by 2030.

Nemmeli desalination plant to be ready by 2023

Nearly 51.25% of the construction in the plant has been completed

Government has decided to shut down 344 MGLCs