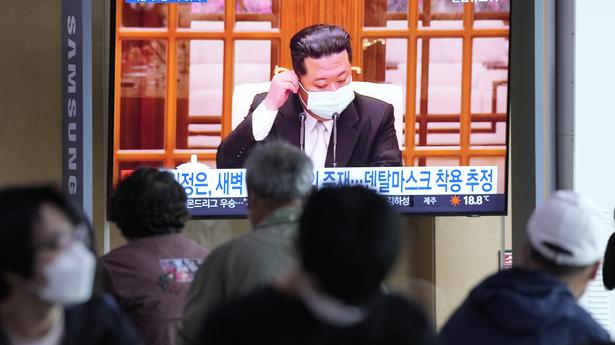 North Korea on May 14 reported 21 new deaths and 1,74,440 more people with fever symptoms as the country scrambles to slow the spread of COVID-19 across its unvaccinated population. The new deaths and cases since Friday increased total numbers to 27 deaths and 5,24,440 illnesses amid a rapid spread of fever since late April.

North Korea said 2,43,630 people had recovered and 2,80,810 remained in quarantine. State media didn't specify how many of the fever cases and deaths were confirmed as COVID-19 infections. The country imposed what it described as maximum preventive measures on Thursday after confirming its first COVID-19 cases since the start of the pandemic.

It had previously held for more than two years to a widely doubted claim of a perfect record keeping out the virus that has spread to nearly every place in the world. North Korean leader Kim Jong Un during a ruling party Politburo meeting on Saturday described the outbreak as a historically “great upheaval” and called for unity between the government and people to stabilise the outbreak as quickly as possible.

In a report presented to the Politburo, the North's emergency epidemic office blamed most of the deaths on “mistakes like overmuch taking of drugs, bereft of scientific medical treatment”.

Kim, who said he was donating some of his private medicine supplies to help the anti-virus campaign, expressed optimism that the country could bring the outbreak under control, saying most transmissions are occurring within communities that are isolated from one another and not spreading from region to region.

He called for officials to take lessons from the successful pandemic responses of other nations and picked an example in China, the North's major ally. China, however, has been facing pressure to change its so-called “zero-COVID” strategy that has brought major cities to a standstill as it struggles to slow the fast-moving omicron variant.

Argentina now becomes the latest country to confirm cases of monkeypox as part of a global outbreak.

The 18-year-old American, who was still a toddler when Kanepi played the first of two quarter-finals at Roland Garros in 2008, will next face Belgian 31st seed Elise Mertens

WHO: Nearly 200 cases of monkeypox in more than 20 countries

Monkeypox does not spread easily and typically requires skin-to-skin contact for transmission.

Ministers from the G-7 countries meeting in Berlin also announced a target to have a “highly decarbonised road sector by 2030,” meaning that zero-emission vehicles would dominate the sales by the end of the decade.

The meetings were held on the sidelines of UAE Climate Envoy and Minister of Industry and Advanced Technology Dr. Sultan Al Jaber's visit to New Delhi on May 26, UAE’s official news agency said.

Cabinet members do not have Constitutional immunity under Article 248, rules Pakistan’s Supreme Court

Chief Justice of Pakistan Bandial made these observations during the hearing of the 5-member Bench on a suo motu notice on the perceived apprehension of "persons in authority" undermining the criminal justice system.

U.S., Germany to boost cooperation on shift to clean energy

The deal will see U.S. and Germany work together to develop and deploy technologies that will speed up that clean energy transition, particularly in the area of offshore wind power, zero-emissions vehicles and hydrogen.

Ukraine's President Volodymyr Zelensky reiterated accusations that Moscow is carrying out a "genocide" in Donbas, saying its bombardment could leave the entire region "uninhabited".

Ukraine says everything being done to defend Donbas from Russian onslaught

Pro-Russian separatists said Friday they had captured the town of Lyman between Severodonetsk and Kramatorsk, on the road to the key cities still under Kyiv’s control

Monkeypox outbreak | Experts call on WHO, governments for more action on infectious disease

While monkeypox is not as transmissible or dangerous as COVID-19, there needs to be clearer guidance on how a person infected with the disease should isolate, said the scientists

Russia and Ukraine have blamed each other after peace talks stalled, with the last known face-to-face negotiations on March 29

The island nation is suffering its worst economic meltdown since independence, with shortages of fuel and other vital goods making life miserable for its 22 million people.

Russia’s hypersonic missile Zircon was fired from the Admiral Gorshkov frigate stationed in the Barents Sea and “successfully hit” a target stationed 1,000 km away in the White Sea

Eastern Ukraine town of Lyman is under our full control, says Russia

Watch | Who is Anthony Albanese?

The storm damaged roads, bridges and telecommunications and power facilities in Yunnan’s Qiubei county, which is about 130KM north of the border with Vietnam.

Explained | What is the Indo-Pacific Economic Framework for Prosperity?

The U.S.-led economic grouping of a dozen countries representing 40 per cent of the global GDP proposes to advance resilience, economic growth, competitiveness and fairness in member countries. However, some analysts view it as a move to counter China’s growing influence in the region.