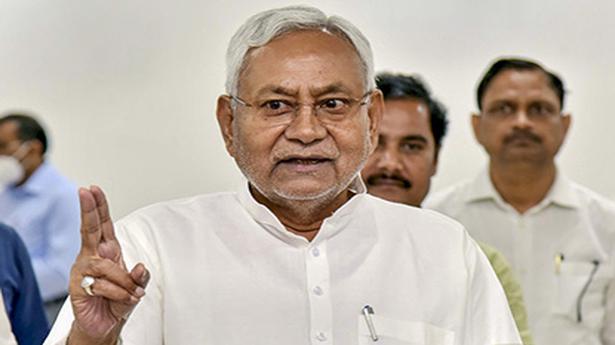 Chief Minister may skip a meeting of NITI Aayog, set to be chaired by PM Modi in New Delhi on Monday

Bihar Chief Minister Nitish Kumar may soon skip another event attended by Prime Minister Narendra Modi. If Bihar government officials are to be believed, the Chief Minister has decided to skip a meeting of NITI Aayog, set to be chaired by PM Modi in New Delhi on Monday.

This would be the third time in a month when Mr. Kumar will be skipping an event in which PM Modi will be present, even though Union Home Minister Amit Shah during his recent visit to Bihar, had asserted that BJP would contest the upcoming parliamentary election in 2024 along with alliance partner JD(U).

Mr. Kumar who recently recovered from Covid-19, wanted to send his deputy in the Cabinet to attend the meeting, but was informed that the event was for Chief Ministers only.

Earlier this month, Mr. Kumar had stayed away not only from the dinner hosted for outgoing President Ram Nath Kovind by PM Modi but also from the swearing-in ceremony of President Droupadi Murmu. Mr. Kumar had also skipped a meeting of Chief Ministers called by Union Home Minister Amit Shah and sent his deputy to attend it.

Mr. Kumar skipping such events has further fuelled speculations of growing rift between two ruling alliance partners in Bihar. However, during his recent visit to the State to address the party’s joint national executive meeting in Patna, Mr. Shah had declared that BJP would contest the 2024 Lok Sabha and 2025 State Assembly elections in alliance with JD(U).

But, JD(U) national president Rajiv Ranjan Singh alias Lalan Singh said that JD(U) was making poll preparation on its own and right now it was not clear whether the party would contest the next Assembly poll in alliance with the BJP.

According to State government officials, Mr. Kumar may skip the NITI Aayog event as the think tank, of late, “has been putting Bihar at the bottom of State development rankings and this would not have gone down well with the Chief Minister”.