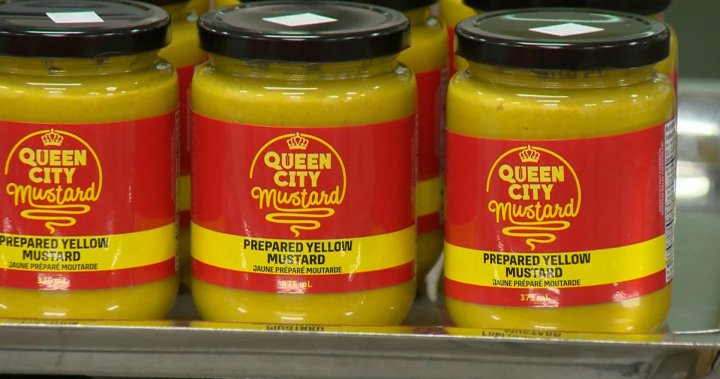 Could Regina be known as the mustard capital of Canada?

Those at Regina Exhibition Association Limited (REAL) certainly think so, and they may have a strong argument.

“Saskatchewan is the largest grower of mustard and the biggest exporter of mustard in Canada,” said Kirk Westgard, vice-president of agriculture for REAL.

“A lot of it is grown right here around Regina. You don’t have to go very far to see agriculture being produced and made in connection to a farmer.”

Aug. 3-7 has officially been named “spread the mustard” week by the City of Regina in celebration of the famous condiment.

“Anywhere in North America at any ballpark you go to, hotdogs and mustard are best friends and all that mustard is coming from right here in Saskatchewan,” Westgard said. When Westgard was asked if he preferred ketchup or mustard, he could only laugh.

To really cement the mustard capital, a new product has been created called “Queen City Mustard” which is currently available at the Regina Ex.

The rain began Monday morning and intensified through the evening hours, causing more than 400 people were forced to evacuate from their homes.

The U.S. has long been alarmed by China's attempt to influence foreign elections, mounted campaigns of cyber and corporate espionage, and detained many minority Uyghurs in camps.

The killings have spread fear beyond New Mexico, where Muslims comprise less than 1% of adults in the statewide population of 2.1 million, according to the Pew Research Center.

A spokeswoman from the Defence Department says Canada does not have any frigates attached to either of the naval groups after HMCS Montreal and Halifax returned last month.

The white man who fatally shot Ahmaud Arbery after chasing the Black man in a Georgia neighbourhood was sentenced Monday to life in prison for committing a federal hate crime.

Military experts carried out a controlled explosion to defuse the 1,000-pound bomb left in the River Po from the Second World War.

Authorities investigating whether the killings of four Muslim men are connected said they need help finding a vehicle believed to be connected to the deaths in Albuquerque.

France on Sunday braced for a fourth heatwave this summer as its worst drought on record left parched villages without safe drinking water.

Musqueam Nation: Trutch Street’s new name to be unveiled on National Day for Truth and Reconciliation

Support for Fumio Kishida's cabinet has plunged amid scrutiny over the government's ties to the conservative Unification Church, which may have motivated Shinzo Abe's assassin.

Facebook owner Meta said it received a legal warrant from law enforcement about the case, which did not mention the word "abortion."

Footage shared by Russian state media shows the 70-year-old actor standing in what appears to be the wreckage of a building identified as Ukraine's Olenivka prison in Donetsk.

New Langya virus detected in China. Here’s what we know so far

Thirty-five people in two Chinese provinces infected with a new zoonotic virus that is believed to have transmitted from shrews. Is there reason to be concerned?

Prosecutors said the act was likely in retaliation for the January 2020 strike that killed Qassem Soleimani, who was the head of Iran's elite Quds Force.

Some trends do point to lower future inflation. The supply chain snags that have elevated prices for cars, furniture, appliances and other goods are easing.

Authorities obtained Facebook messages between the woman and her daughter with a search warrant, detailing in court documents how the two planned the medical abortion.

Monkeys in Brazil under attack amid rising monkeypox fear and outbreaks

Brazilian news website G1 reported on Sunday that 10 monkeys had been poisoned in less than a week in the city of Sao Jose do Rio Preto, in Sao Paulo state.

The NTSB also said the landing of the plane was so hard the employee thought the plane had crashed.

Alex Jones may pay less in punitive damages to Sandy Hook family. Why?

Kremlin spokesman Dmitry Peskov expressed hope Tuesday that “common sense” will eventually prevail in European countries that are calling to bar Russians from traveling to the EU.

Russia, as part of what it calls its "special military operation," has said it plans to seize full control of the Donbas on behalf of pro-Kremlin separatist forces.

Resilient Ukrainians turn a village clean-up into a rave

Young people in Ukraine have come up with a novel way to help villages devastated by war: hire some musicians, pump up the music and have a dance party while clearing debris.