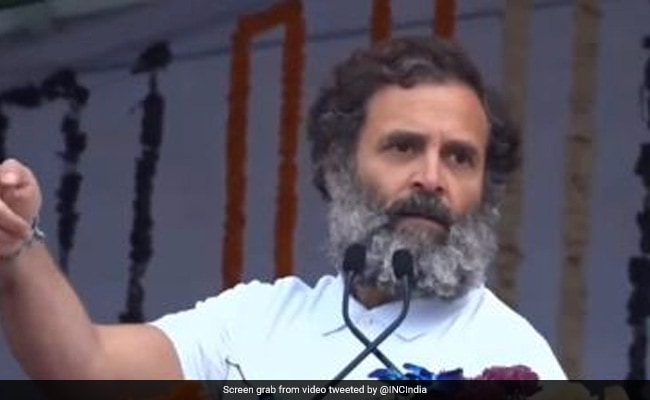 Bhupesh Baghel made this suggestion when asked about the Congress leader Rahul Gandhi roaming in just a t-shirt in the 'Bharat Jodo Yatra'.

Chhattisgarh Chief Minister Bhupesh Baghel while interacting with the media on Saturday suggested research be conducted on 'people staying without clothes' as Rahul Gandhi enters Haryana leading 'Bharat Jodo Yatra'.Bhupesh Baghel made this suggestion when asked about the Congress leader Rahul Gandhi roaming in just a t-shirt in the 'Bharat Jodo Yatra'.

He said, "It's not happening for the first time in the country. Naga Sadhus, Digambar Jain Muni, many people stay without clothes. Research should be done on the issues which Rahul Ji is raising."

Mr Baghel also took a jibe at the Central government and Home Minister Amit Shah before his visit to the state. He claimed, "He (Union Home Minister Amit Shah) is coming (to state) for Lok Sabha polls and not for state Assembly polls. Bharatiya Janata Party is taking forward two of its favourite topics: conversion and polarization. In the last four years, our party increased the income of all the groups including farmers and women."

The 'Bharat Jodo Yatra' marched in Karnal, Haryana on Saturday along with colourful processions. Despite the dense fog covering most of the northern belt, the supporters of the yatra waived the national flag and danced to the beat of the drums on Saturday.

Asaram is currently lodged in a Jodhpur jail, where he is serving life sentence in another case of raping a minor girl at his ashram.

A bench of Chief Justice of India DY Chandrachud and Justice PS Narasimha posted the matter for hearing in the third week of March.

She also claimed that she and her party Trinamool Congress have been taking care of the Matua community people, whose roots are in Bangladesh, and blamed the BJP for trying to approach them as a "friend" in the name of the CAA.

In her address to a joint sitting of Parliament on the first day of the Budget Session, she said the world is acknowledging New Delhi's "tough stand" on terrorism, and described the current phase of India's global relations as the "best" one.

Upendra Kushwaha insisted that Nitish Kumar was no longer able to exercise his own volition, resulting in JD(U)'s vulnerability.

The meeting between Mr Doval and Mr Milley took place on Monday at the India House here, the official residence of India's Ambassador to the US Taranjit Singh Sandhu.

Asaram "Habitual Offender", Should Be Imprisoned For Life, Court Told

The 81-year-old godman is currently lodged in a Jodhpur jail, where he is serving life sentence in another case of raping a minor girl at his ashram in Rajasthan in 2013.

The DMK has called the former IPS officer "cut and paste Annamalai".

Except for death penalty cases, the review pleas are usually decided by judges concerned in chambers by circulation.

Prime Minister Netanyahu described the Haifa port deal with the Adani Group as an "enormous milestone", saying it will significantly improve connectivity between the two countries in many ways.

One set of petitions challenges the laws permitting funding of political parties through the electoral bond scheme, while the second set seeks to bring parties under the purview of the transparency law, the Right to Information Act.

The allegations were levelled by prominent grapplers such as Vinesh Phogat, Bajrang Punia, Sakshi Malik and Ravi Dahiya.

The ruling Trinamool Congress dubbed the visit a result of "political vendetta", while the opposition BJP accused the ruling dispensation of trying to "hide a scam".

Originally an engineer and computer sciences expert, Sudha Murthy has written over 20 books, some of which have inspired TV series, other adaptations

Some students also alleged that he would keep his hand on their shoulder and in their pockets during classes.

Sources said Siddique Kappan cannot be released today since the District Judge of the special court on Prevention of Money Laundering was busy with a bar council election.

Till November 2022 this fiscal year, 1.7 crore demat accounts were added as compared to 2.2 crore during the year-ago period, says Economic Survey

Intelligence and Security organisations exempted are not bound to provide the related information under RTI, the High court held on January 25, 2023.

How Much Will India Grow By 2030? Chief Economic Adviser Has This To Say

V Anantha Nageswaran said that by and large, inflation is likely to be "well behaved" in the 2023-24 fiscal year

"Had To Wait 30 Mins": Khushbu Sundar Slams Air India Over Delay In Getting Wheelchair

The airline apologised to Ms Sundar for the inconvenience caused.