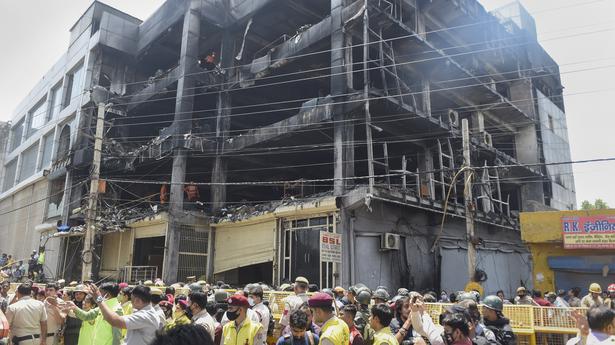 At least 27 people were killed and 12 injured after a massive fire ripped through a four-storey building in Mundka on May 13.

Delhi Lieutenant Governor Anil Baijal on May 14 said he was "deeply pained" by the loss of lives in the Mundka fire tragedy and called for immediate steps to prevent the recurrence of such an incident in the future.

Mr. Baijal also extended his condolences to the bereaved families.

"Deeply pained by the tragic fire incident in Mundka, Delhi. Despite best rescue efforts many precious lives were lost. My deepest Condolences to the bereaved families and prayers for speedy recovery of those injured," Baijal tweeted.

"Even as we go into the details of causes behind the tragedy, immediate steps should be taken by all concerned to ensure that such incidents do not recur," Mr. Baijal said.

At least 27 people were killed and 12 injured after a massive fire ripped through a four-storey building in Mundka on May 13.

The fire started from the first floor of the building that housed the office of a CCTV camera and router manufacturing and assembling company, police said.

It is suspected that an explosion in an AC may have triggered the fire, according to fire officials.

The Yogi Adityanath government on May 26 presented its maiden Budget of the second term with a focus on education, employment, empowerment of women and farmers besides law and order.

Nature enthusiasts taken on a trek to Yercaud

Earlier, Mr. Soren was asked to appear before the Election Commission either in person or through his counsel on May 31

The LDF and UDF left no stone unturned in their electioneering in Thrikkakara as it emerged as a battle of prestige between Chief Minister Pinarayi Vijayan and Leader of the Opposition V. D. Satheesan