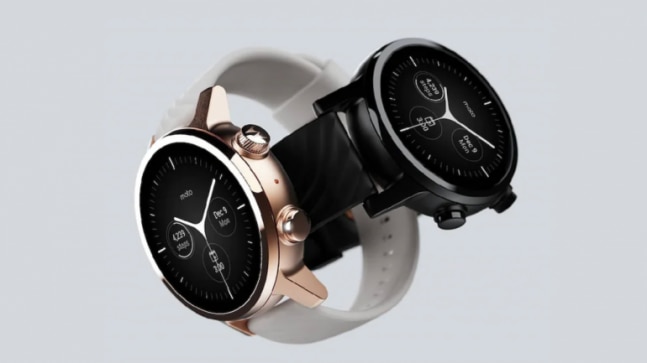 As per reports, Motorola is set to launch a new smartwatch called Moto Watch 100 in association with CE.

Motorola may soon drop yet another smartwatch in the market. As per reports, Motorola is set to launch a new smartwatch called Moto Watch 100 in association with CE. This means that the Motorola watch that is expected to hit the market soon would not be built by Motorola but buy a Canadian company that is called CE Brands Inc. An investor report from CE Brands shows revealed the production details of the smartwatch. The Moto Watch was also listed on FCC which provided a glimpse of the specifications and features of the Moto Watch 100.

“We are also very excited to be on the verge of launching our next wearables' product under the Motorola brand with the Moto Watch 100, which we are confident will further establish the Motorola brand in the expanding smartwatch segment,” the press release by CE Brands revealed. The Company currently has the following products in the market: Kodak Baby Monitors and Air Purifiers and Motorola entry-level Smartwatches. The news was first spotted by 9to5Google. The company did not reveal the exact launch date of Moto Watch 100 were not shared by CE Brands and Motorola.

The ICMAI CMA Admit card 2021 has been released for the December exam. Check here for direct download

The TN TRB Polytechnic Admit card 2021 has been released. Candidates who will appear for the exam can download their admit cards directly.

DUET Result 2021 has been released for 3 MPhil, PhD courses. Applicants can now download their scorecards directly.

A Twitter user has shared the image of Poco M3 smartphone after the explosion. The company is investigating the matter.

The Rajasthan Chief Minister, Ashok Gehlot, gave the approval for the recruitment of 1000 more college lecturers in a recent meeting.

A new variant of the Redmi Note 10S will be up for sale starting this Friday. Here is what it has to offer and how Xiaomi aims for the slightly higher price range with the new device.