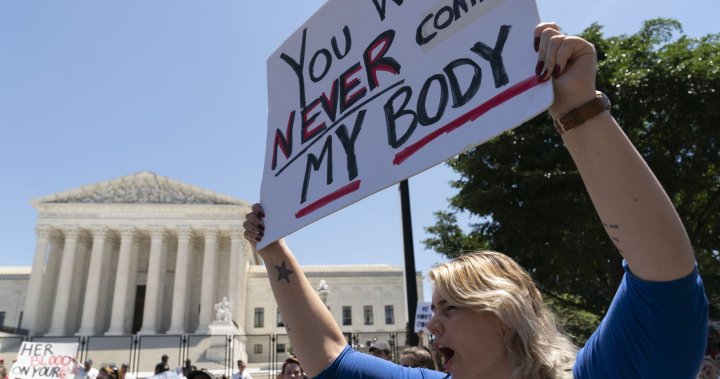 Democratic governors of Colorado and North Carolina issued executive orders to protect abortion providers and patients from extradition to states that have banned the practice.

Democratic governors in states where abortion will remain legal are looking for ways to protect any patients who travel there for the procedure — along with the providers who help them — from being prosecuted by their home states.

The Democratic governors of Colorado and North Carolina on Wednesday issued executive orders to protect abortion providers and patients from extradition to states that have banned the practice.

Abortions are legal in North Carolina until fetal viability or in certain medical emergencies, making the state an outlier in the Southeast.

“This order will help protect North Carolina doctors and nurses and their patients from cruel right-wing criminal laws passed by other states,” Gov. Roy Cooper said in announcing the order.

The governors of Rhode Island and Maine also signed executive orders late Tuesday, stating that they will not cooperate with other states’ investigations into people who seek abortions or health care providers that perform them.

Maine Democratic Gov. Janet Mills said she will “stand in the way of any effort to undermine, rollback, or outright eliminate the right to safe and legal abortion in Maine.”

Their offices confirmed Wednesday that they are preemptive, protective moves, and that neither state has received a request to investigate, prosecute or extradite a provider or patient.

Employees at a business in southeast Calgary are keeping their eyes to the sky after a co-worker was attacked by an aggressive hawk.

Monkeypox cases in Canada surpass 1K, with most in Ontario

Ontario reported a total of 478 monkeypox cases, making it the province with the most cases in Canada while Quebec reported 425 cases.

The Nunavik Regional Board of Health asked Quebec to supply medical workers, including requesting that Ottawa send Armed Forces members who can provide health care.

The provincial government said the Bay d'Espoir Highway was open, however forest resource roads along the route would remain closed.

The highly unusual step is a stark acknowledgment that the U.S. currently lacks the supplies needed to vaccinate everyone seeking protection from the rapidly spreading virus.

Continuing hot and dry conditions have prompted officials to put a fire restriction in a stretch of the Rocky Mountains and foothills.

The 'That '70s Show' actor said he's "lucky to be alive" after rare autoimmune disorder vasculitis left him unable to see, walk or hear.

Gen. Wayne Eyre defended the mandate, saying the Canadian Forces is the country's "insurance policy" and its members must be prepared.

Suncor’s Colorado refinery back to normal operations after Monday outage

Suncor sent out an alert Monday morning warning residents in the area that the temporary shutdown could result in additional flames and smoke from the refinery flares.

Researchers found that 218 out of the known 375 human infectious diseases seemed to be made worse by one of 10 types of extreme weather connected to climate change.

Pfizer and French biotech Valneva are aiming to avoid previous pitfalls in developing a new vaccine to protect both adults and kids as young as 5 from Lyme disease.

Kansas to begin recount of abortion referendum despite large ‘No’ vote. Here’s why

Nine of the state's 105 counties are doing the recount at the request of Melissa Leavitt, of Colby, in far northwestern Kansas, who has pushed for tighter election laws.

‘We need inches of rain to recover’: Alberta ranchers and farmers desperate for a downpour

Alberta's heat wave and lack of rain is killing crops and farmland across parts of the province. The stress on ranchers and farmers desperate for rain is taking its toll.

Technoparc Oiseaux members are calling on the federal government to protect the land. The group started an online petition that's garnered over 27,000 signatures on Monday.

The Health Department says it launched the new vaccine campaign for at-risk people because it expects infections to rise in the fall after schools reopen.

How can tech companies grow amid sector downturn? Experts weigh in

One of the best-performing sectors during the pandemic, the technology sector is now facing a challenging time as a reversal in fortunes has companies tightening their belts.

The Fraser Valley Regional District is warning residents that there is a planned temporary outage for Telus service in its region.

The development comes after Rogers last month opposed a request from regulators for more time to probe the Freedom Mobile sale to Quebecor.

The Canada Border Services Agency is allowing a one-time exemption for vaccinated travellers who may be unaware of the requirement to submit their health information via ArriveCAN.

An 'expressway' for storm water currently under construction in Calgary will help prevent storm sewers from backing up with water from higher elevations and reduce flooding.

How does polio spread? What are the symptoms? Here’s what we know

The polio virus is considered very contagious and spreads mostly from person to person, through contaminated water and via fecal particles.

For a second time, a patient at Royal Jubilee hospital in Victoria has complained about being put into a sunroom rather than a proper recovery room after receiving treatment.

Some parents in Quebec are upset that pediatricians will no longer be doing routine checkups for healthy children.

Highway 1 closed due to mudslide near Lytton, B.C.

The mudslide has closed Highway 1 between Lytton and Spences Bridge in both directions between Highway 8 and Highway 12.

The vaccine manufacturer is announcing that it has agreed to purchase land in a biotechnology park in Laval, Que., a northern suburb of Montreal.