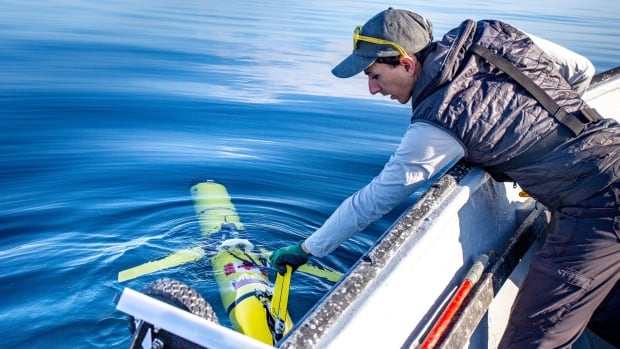 It's that rarest of rare conditions along coastal Newfoundland: a dead calm day.

By 7 a.m., the crew aboard the fishing boat Belle of the Bay are taking full advantage of it, steaming out of the harbour in Heart's Content under dazzling July sunshine, with their sights set on a prized catch in the middle of Trinity Bay.

It's not fish they're after. The object awaiting them looks like a mashup between a torpedo, a banana, and a Dash 8 — a type of underwater drone, called a glider.

"This isn't the regular kind of job that I would recommend for people that don't like to be challenged. It's a mission," said Nicolai von Oppeln-Bronikowski, the head of Memorial University's glider operations.

"I think everybody that works with gliders sees themselves, in one way or the other, on a mission."

Today's mission to retrieve that glider — nicknamed Migaloo, after a humpback whale — is a team effort. It combines the scientific lens of von Oppeln-Bronikowski and research assistant Sarik Shaikh-Upadhye, with the fishing father-son duo of Doug and Kyle Piercey, who have loaned their boat and expertise to Memorial University glider research for nearly a decade.

"It's not light," Doug Piercey says as he and von Oppeln-Bronikowski heave the 1.5 metre-long Migaloo out of the bay. The two check it over, paying particular attention to a prototype sensor attached to it like a little scientific backpack.

"This is the pH sensor right there, that the whole fuss is about," said von Oppeln-Bronikowski.

At first glance, Migaloo and its sensor are intact, marking the first milestone in a year-long effort everyone on the boat simply refers to as ACOP: the Atlantic Carbon Observatory Pilot Program.

"ACOP is sort of a small stepping stone in terms of advancing our ability to make more measurements of CO2 [in the ocean]," said von Oppeln-Bronikowski.

Those measurements are badly needed as carbon dioxide emissions in the atmosphere continue to climb.

"If you ask the question, where is most of the carbon on our planet? The answer is, it's in the ocean," said Brad deYoung, a physical oceanographer at Memorial University and lead researcher with ACOP.

The world's oceans are a vast carbon sink — absorbing anywhere from a quarter to a third of the carbon dioxide we pump into the atmosphere.

"What that means for us, in a planetary sense is, that the rise that we see of the CO2 in the atmosphere is a lot less than it would otherwise be if there were no ocean. So the ocean plays a big role in mitigating and slowing down the pace of climate change," said deYoung.

Thirty-eight years ago, Don Burnstick was sitting in rehab trying to figure out his life. He had to process the trauma and hurt he'd endured as a child. It was uncomfortable.

Authorities in Western Australia on Wednesday recovered a tiny but dangerous radioactive capsule that fell off a truck while being transported along a 1,400-kilometre highway last month in what an official said was like finding a needle in a haystack.

Bird flu keeps spreading beyond birds. Scientists worry it signals a growing threat to humans, too

As a deadly form of avian influenza continues ravaging bird populations around much of the world, scientists are tracking infections among other animals — including various types of mammals more closely related to humans.

A free program at the University of Winnipeg is offering self-defence classes to Indigenous women as a way to build confidence and personal safety.

An amateur astronomer from southwestern Nova Scotia has captured a dazzling time-lapse of the green comet that's making a rare pass near Earth.