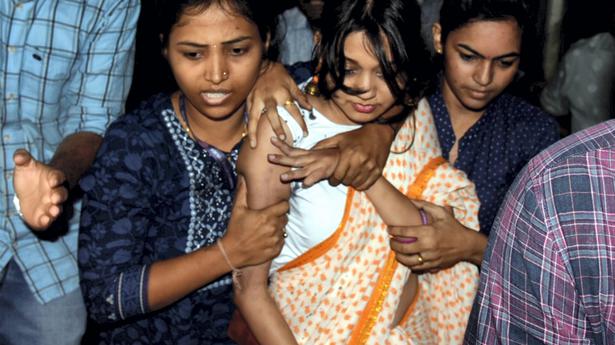 Parties including BJP and MNS condemn the remark

A small-time Marathi actor’s derogatory social media post against Nationalist Congress Party (NCP) chief Sharad Pawar led to her arrest and widespread condemnation from all political parties in the State on Saturday. This is the second incident in a week where a youngster has targeted Mr. Pawar. Earlier in the week, a 22-year-old man was arrested for issuing a threat to kill the NCP chief.

Actor Ketki Chitle was arrested by Thane police on Saturday evening based on a complaint filed by NCP worker Swapnil Netke at Kalwa police station. She had posted a lyrical post from someone named Adv. Nitin Bhave, mocking the physical illness of Mr. Pawar and also wishing for his death. NCP workers had filed complaints against her in Kalwa and Mumbai. The actor will be produced in the court on Sunday.

Ms. Chitle’s post was condemned unanimously across parties with Maharashtra Navnirman Sena (MNS) chief Raj Thackeray issuing a statement saying such language and thoughts have no place in the culture of Maharashtra and his party condemns it. “It is important to investigate whether it is an attempt to create a new controversy in the State. Because such two-three individuals create animosity within communities. The State government must probe and find out the real culprits,” he said.

Bharatiya Janata Party (BJP) leader and former Chief Minister Devendra Fadnavis too said that he will never endorse such derogatory comments. “We may have political differences but such language should not be used,” he said.

Mr. Pawar’s nephew and the State’s Ddeputy Chief Minister Ajit Pawar said that Ms. Chitle requires mental health assessment while the NCP chief himself said that he hasn’t even read what the actor wrote.

A day ago, Nasik based youth Nikhil Bhamre was arrested after he issued Twitter threats to assassinate Mr. Pawar like Nathuram Godse did to Mahatma Gandhir.