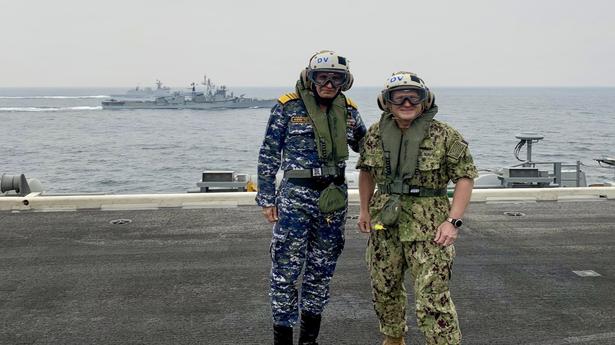 This is the 25th edition of Exercise Malabar

Chief of Naval Staff, Indian Navy, Admiral Karambir Singh and Chief of Naval Operations (CNO), U.S. States Navy, Admiral Michael Gilday embarked on the aircraft carrier during the ongoing second phase of Malabar exercise in the Bay of Bengal. This is the 25th edition of the naval exercise, which began as a bilateral exercise between India and the U.S. in 1992.

“This visit to Carl Vinson during Malabar was an important opportunity to see first-hand the integration between our two navies at-sea,” Adm Gilday said in a statement issued by the U.S. Navy. “By our navies continuing to exercise together, as we are doing right now alongside Japanese and Australian naval forces, there is no doubt our partnership will only continue to grow. Cooperation, when applied with naval power, promotes freedom and peace, and prevents coercion, intimidation and aggression.”

At least six civilians were injured in a grenade attack by terrorists in Bandipora district of Jammu and Kashmir on Tuesday, police said. &quot;At about 10:20 am, terrorists hurled a grenade upon the

Mr. Wankhede in his affidavit submitted to a Mumbai court claimed he was under a "lurking threat of arrest as it does not suit some vested interests for conducting an honest and impartial investigation".

: Congress has joined Dravida Munnetra Kazhagam in criticising the National Democratic Alliance government for its “poor” handling of law-and-order situation in the Union Territory.In a virtual statem

Congress Sonia Gandhi emphasised on discipline and unity at a key meeting of top party leaders to evolve a strategy for assembly elections in five states early next year.At the meet, Ms. Gandhi spoke

The camp will be mostly for those requiring Covishield doses

The woman complainant had alleged that he raped her on the pretext of marrying her, police officials said

Myanmar skips ASEAN summit after its military ruler shut out

The talks will be joined by other world leaders including U.S. President Joe Biden and the leaders of China and Russia, and are expected to spotlight Myanmar’s worsening crisis, as well as regional security and economic issues