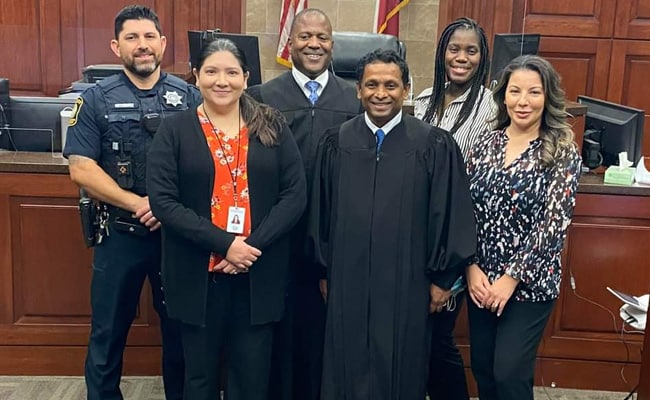 Born and raised in Kerala'sKasaragod, Surendran dropped out of school and took updaily wage jobs to earn a living.

51-year-old Surendran K Pattel who was recently sworn in as a district judge in Texas says his days rolling beedis and working as a housekeeper helped him achieve success in the United States. Born and raised in Kerala's Kasaragod, Surendran dropped out of school and took up daily wage jobs to earn a living.

"I dropped out of school after Class 10 because my family had no financial means to continue. I rolled beedis for a year as a daily wager and that changed my perspective on life," Mr Pattel told NDTV.

Determined to turn his life around, Surendran sought financial help from his friends in his village to complete his education, including his law degree. He also worked a housekeeping job in a local hotel while he studied to sustain himself.

"Once I finished my LLB, the practice I got there helped me survive in the United States," Mr Pattel said, adding that his journey in the US was also not without its hurdles.

How Much Will India Grow By 2030? Chief Economic Adviser Has This To Say

V Anantha Nageswaran said that by and large, inflation is likely to be "well behaved" in the 2023-24 fiscal year

"Had To Wait 30 Mins": Khushbu Sundar Slams Air India Over Delay In Getting Wheelchair

The airline apologised to Ms Sundar for the inconvenience caused.

Asaram is currently lodged in a Jodhpur jail, where he is serving life sentence in another case of raping a minor girl at his ashram.

A bench of Chief Justice of India DY Chandrachud and Justice PS Narasimha posted the matter for hearing in the third week of March.

She also claimed that she and her party Trinamool Congress have been taking care of the Matua community people, whose roots are in Bangladesh, and blamed the BJP for trying to approach them as a "friend" in the name of the CAA.

In her address to a joint sitting of Parliament on the first day of the Budget Session, she said the world is acknowledging New Delhi's "tough stand" on terrorism, and described the current phase of India's global relations as the "best" one.

Upendra Kushwaha insisted that Nitish Kumar was no longer able to exercise his own volition, resulting in JD(U)'s vulnerability.

The meeting between Mr Doval and Mr Milley took place on Monday at the India House here, the official residence of India's Ambassador to the US Taranjit Singh Sandhu.

Asaram "Habitual Offender", Should Be Imprisoned For Life, Court Told

The 81-year-old godman is currently lodged in a Jodhpur jail, where he is serving life sentence in another case of raping a minor girl at his ashram in Rajasthan in 2013.

The DMK has called the former IPS officer "cut and paste Annamalai".

Question papers of written examinations for the post of Constables in Himachal Pradesh Police were leaked ahead of the date by several middlemen.

Prime Minister Netanyahu described the Haifa port deal with the Adani Group as an "enormous milestone", saying it will significantly improve connectivity between the two countries in many ways.

One set of petitions challenges the laws permitting funding of political parties through the electoral bond scheme, while the second set seeks to bring parties under the purview of the transparency law, the Right to Information Act.

The allegations were levelled by prominent grapplers such as Vinesh Phogat, Bajrang Punia, Sakshi Malik and Ravi Dahiya.

The ruling Trinamool Congress dubbed the visit a result of "political vendetta", while the opposition BJP accused the ruling dispensation of trying to "hide a scam".

Originally an engineer and computer sciences expert, Sudha Murthy has written over 20 books, some of which have inspired TV series, other adaptations

Some students also alleged that he would keep his hand on their shoulder and in their pockets during classes.

Sources said Siddique Kappan cannot be released today since the District Judge of the special court on Prevention of Money Laundering was busy with a bar council election.

Till November 2022 this fiscal year, 1.7 crore demat accounts were added as compared to 2.2 crore during the year-ago period, says Economic Survey

Intelligence and Security organisations exempted are not bound to provide the related information under RTI, the High court held on January 25, 2023.