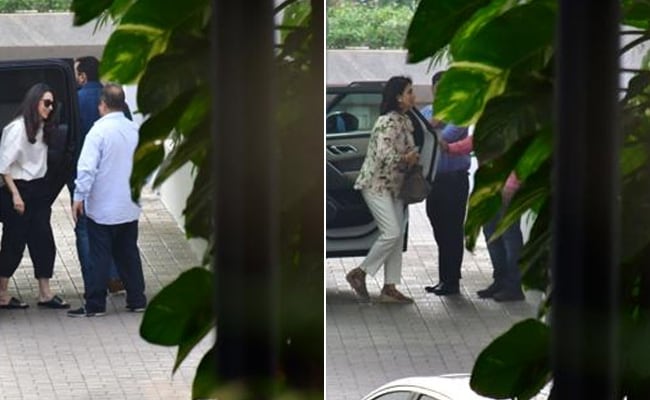 The Kapoor family was clicked at Ranbir Kapoor and Alia Bhatt's Vastu residence in Bandra, Mumbai, after enjoying brunch at Karisma Kapoor's home. Neetu Kapoor, Kareena Kapoor with husband Saif Ali Khan and Karisma were pictured arriving at his residence to meet the couple's two-month-old daughter Raha. It is the first time the Kapoor sisters were spotted at Ranbir and Alia's house after the birth of Raha. The Kapoor sisters twinned in white and black ensembles, while Saif kept it simple in a blue shirt and pants. Ranbir's mom Neetu Kapoor opted for an off-white ensemble.

Here have a look at the pictures:

Earlier today, Kareena Kapoor and Saif Ali Khan were pictured at Karisma Kapoor's house. The couple, along with Taimur and Karisma, was pictured leaving for Ranbir's house. Check out the pictures below:

The adorable clip shows a doting father helping his daughter and prompting her during her school's annual function.

"I sat proud, elated and bursting with only love for the two of them!" wrote Karan Johar

Abhishek, Aishwarya and Aaradhya were in the Maldives to celebrate his birthday

The actress was given a warm welcome by her family and Sumbul Touqeer, who was evicted two days before her elimination

Kiara Advani and Sidharth Malhotra are getting married today

The video shows a baby elephant and its family in Anamalai Tiger Reserve.