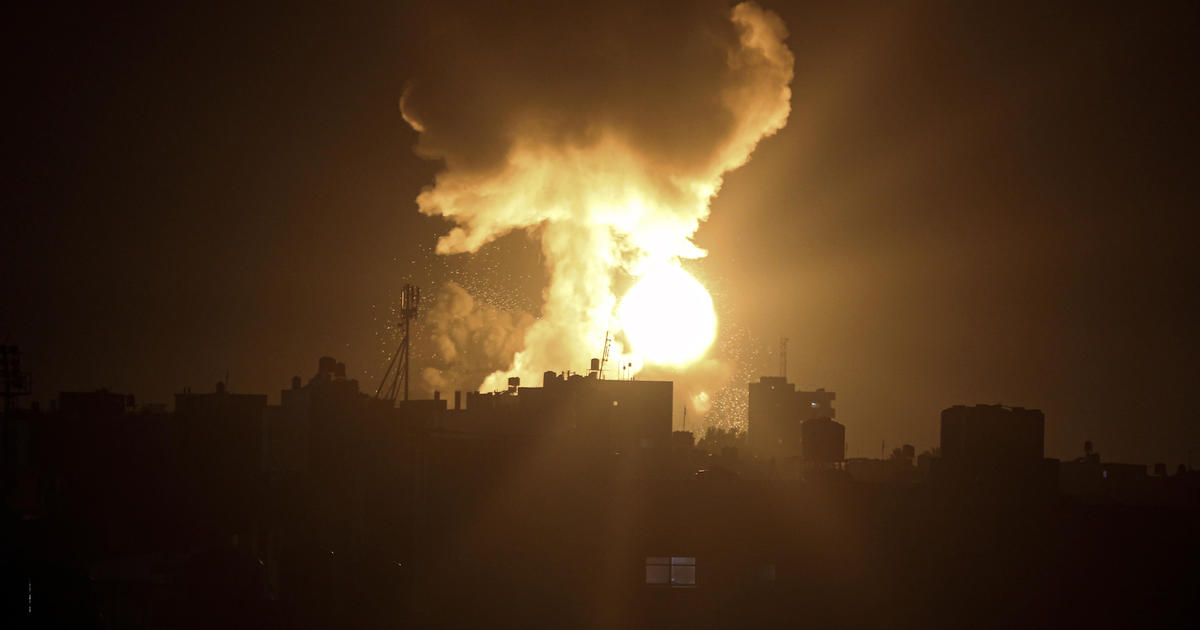 Israel's military said early Sunday it launched strikes against militant targets in the Gaza Strip, a day after rockets were fired from the Hamas-ruled territory.

The Israeli military said the attacks targeted a rocket manufacturing facility and a military post for Hamas. It also blamed the militant Islamic group for any violence emanating from the territory it controls.

London — Thousands of nurses in Britain walked out Wednesday in a new protest over pay, with no end in sight to a wave of strikes that has piled pressure on the U.K.'s overburdened public health system. Two 12-hour strikes on Wednesday and Thursday affect about a quarter of hospitals and clinics in England. Emergency care and cancer treatment will continue, but thousands of appointments and procedures are likely to be postponed.   Nurses, ambulance crews, train drivers, airport baggage handlers, border staff, driving instructors, bus drivers and postal workers have all walked off their jobs in recent months to demand higher pay amid a cost-of-living crisis.   Inflation in the U.K. hit a 41-year high of 11.1% in October, driven by sharply rising energy and food costs, before easing slightly to 10.5% in December.

Manila — Philippine Nobel Prize winner Maria Ressa was on Wednesday acquitted of tax evasion, among a slew of charges she has long maintained are politically motivated, calling the verdict a victory for "truth". Ressa, who shared the Nobel Peace Prize with Russian journalist Dmitry Muratov in 2021, still faces three other cases, including a cyber libel conviction now under appeal that could mean nearly seven years in prison.

Ukraine helicopter crash near kindergarten kills at least 17, including 2 kids and a top minister

Kyiv, Ukraine — Ukraine's interior minister was among at least 17 people, including two children, killed when a helicopter crashed near a kindergarten outside the capital of Kyiv, officials said Wednesday.

The world's oldest known person, French nun Sister André, has died at the age of 118, her spokesperson confirmed to AFP Tuesday.

Three members of a notorious criminal gang confessed to stealing priceless 18th-century jewels from a German state museum at their trial in Dresden on Tuesday.

Beijing — China has announced its first population decline in decades as what has been the world's most populous nation ages and its birthrate plunges, posing new challenges for the slowing economy.

Killings of journalists and media workers surged 50% in 2022, U.N. says

Killings of journalists and other media workers jumped 50% in 2022, with an average of one journalist killed every four days, according to new figures released by the United Nations.

Prince Harry and Meghan Markle's Netflix docuseries, released in December, made headlines and became a polarizing topic of discussion in many circles. One of their most vocal critics, British TV presenter Jeremy Clarkson, has now offered a new and more direct apology for comments he made in a column published in The Sun newspaper, in which he said he "hates" Markle.

A cellphone video taken by a passenger on the Yeti Airlines plane that crashed in Nepal appears to show the harrowing final moments of the flight.

Why Britain's royals won't apologize for profiting off slavery, and why Prince Harry's admission matters

London — The publisher of Prince Harry's new memoir Spare says it's selling at a record-setting pace. Readers bought more than 1.4 million copies of the Duke of Sussex's book the day it was published last week, and it's still making headlines.

A popular Cameroon radio journalist who had been missing following what a media rights group called an abduction has been found dead, his employer and police said on Sunday.

A woman suspected in the murder of a Paraguayan anti-mafia prosecutor was expelled from El Salvador on Saturday and handed over to Colombian authorities, the Colombian prosecutor's office said.

The German government will not object if Poland decides to send Leopard 2 battle tanks to Ukraine, Germany's top diplomat said Sunday, indicating movement on supplying weapons that Kyiv has described as essential to its ability to fend off an intensified Russian offensive.

Ghislaine Maxwell claims in jailhouse interview that photo of Prince Andrew with his accuser is fake: "I don't believe it's real for a second"

Disgraced former socialite Ghislaine Maxwell has claimed in a jailhouse interview with a U.K. broadcaster that a decades-old photograph of Prince Andrew with his sexual abuse accuser Virginia Giuffre is "fake."

Sections of Balkan river have become a floating garbage dump

Tons of waste dumped in poorly regulated riverside landfills or directly into the waterways that flow across three countries end up accumulating behind a trash barrier in the Drina River in eastern Bosnia during the wet weather of winter and early spring.

A prime suspect in the disappearance of 43 college students has been deported to Mexico by U.S. authorities. Federal authorities said the man was caught trying to cross the border on Dec. 20 without proper documents.

The United Nations apologized Friday for photos posted online of a senior delegation's security detail posing in front of the Taliban flag during a visit to Afghanistan this week. But U.N. deputy spokesman Farhan Haq told CBS News the photos "should never have been taken."

Seoul, South Korea — A fire destroyed about 60 makeshift homes in a densely packed neighborhood surrounded by some of the wealthiest streets of South Korea's ultramodern capital Friday. Firefighters extinguished the flames in Seoul's Guryong village within about five hours, and no injuries or deaths were reported.   Shin Yong-ho, an official at the fire department of Seoul's Gangnam district, said rescue workers had searched areas affected by the fire but all residents were believed to have safely evacuated.   More than 800 firefighters, police officers and public workers fought the flames and handled evacuations after the fire began around 6:30 a.m.   Photos showed firefighters fighting the flames under thick, white smoke covering the village as helicopters sprayed water from above. Later, orange-suited rescuers searched through the charred landscape where gray tendrils of smoke were still rising. The capital's skyscrapers gleamed a short distance away.

Peru police use tear gas to block protesters from marching

Police fired tear gas to try to subdue thousands of protesters who poured into the Peruvian capital Thursday, many from remote Andean regions, calling for the ouster of President Dina Boluarte and the return to power of her predecessor, whose removal last month launched deadly unrest and cast the nation into political chaos.

The Greenland ice sheet, one of the coldest and most remote regions of the world that serves a pivotal role in the Earth's climate, is now clearly feeling significant effects of climate change. Researchers found that central and northern areas of the sheet have recently seen the hottest temperatures in a millennium.

Russia says it has opened a criminal case against a U.S. citizen accused of spying

Russia's FSB security service said Thursday it opened a criminal case against a U.S. citizen suspected of espionage, as ties between Moscow and Washington disintegrate further over the Kremlin's nearly year-long Ukraine offensive.

Church of England rejects same-sex marriage, says union is between "one man and one woman for life"

The Church of England on Wednesday outlined proposals that would refuse same-sex marriages in its churches, continuing to teach that marriage is between "one man and one woman for life," it said in a statement. The decision came after five years of debate.

Jerusalem — Israel's top court ruled Wednesday that a senior member of premier Benjamin Netanyahu's newly formed government cannot serve as minister due to a recent tax evasion conviction. The decision was slammed by Prime Minister Netanyahu's coalition, which vowed to push ahead with controversial measures that would weaken the Supreme Court and its power to strike down legislation.